On Tuesday 14th May Professor John Keane of the University of Sydney spoke to the Institute about the rise of new political regimes threatening established, power-sharing democracies around the world, best described by an old term, despotism. Rising global powers such as Russia and China, and many smaller countries like Turkey, Hungary, Saudi Arabia and Turkmenistan, all share similarities that distinguish them from more customary labels such as totalitarian, authoritarian or dictatorial.

He noted that these despotic regimes are entangled, not only financially and politically, but also ideologically in seeking to undermine the established global order of the rule of law and democracy. All of these despotic regimes consider themselves democracies of some sort (Russian ‘managed democracy’ or Chinese ‘peoples’ democracy’) and ground their authority in the sovereignty of their citizens, whilst proclaiming their version of democracy as superior to the traditional western concept. These despotic regimes employ tools which give the illusion of democracy without ceding any real political power to the citizenry. They are ‘phantom democracies’; like phantom pregnancies, people experiencing them think they’re real.

Professor Keane noted that it appears democracy is ‘dying by stealth’. Smaller and newer democracies are falling victim to despotism around the globe under the influence of rising global powers. Meanwhile, even long-established democracies like the United States, the United Kingdom and many European countries are losing credibility faced with these despotic regimes. Asked about how to withstand the coming onslaught and rebut arguments against our systems of government, he suggested that democracies clear their own Augean stables of growing inequality and corruption, for example through effective corruption watchdogs and institutionalised recognition of indigenous rights. He acknowledged that nationalisation of the media might combat the corrosive impact of wealthy media barons with their own agendas, but suggested this was a topic for another day.

In response to a question about mechanisms within the Chinese communist party permitting grassroots participation by party members in policy formation, he said these did not amount to much – they were not genuinely democratic but merely part of phantom democracy. Professor Keane left the audience to consider how democratic societies, like Australia, should combat this rise of despotism. He encouraged us to consider the existence of innate value in democratic systems in the face of criticism from despotic regimes that democracy has run its course. To do otherwise might spell the end of democracy as we know it. 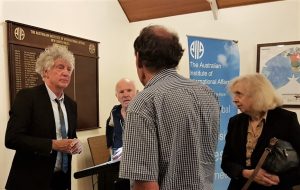 Professor Keane in discussion with audience members following his address