On Tuesday 4 June, AIIA NSW heard from Dr Charles Edel, Senior Fellow at the United States Studies Centre at the University of Sydney. Dr Edel spoke about his recently published book The Lessons of Tragedy: Statecraft and World Order co-authored with Hal Brands, which pays homage to the Ancient Greek idea of tragedy and how it can be utilised to explain and respond to the growing fractures in the current international order.

In the ancient city-state of Athens, there was a pervasive awareness of the possibility of tragedy, found in the plays of Sophocles, Euripides and Aeschylus. In the eyes of ancient Athenians, there was no guarantee that the good times would last. Constant focus was needed on the risk of tragedy to prevent it from emerging in their own society. When societies did encounter tragedy, according to Dr Edel, they were often forced to take actions that did not come naturally to them. This was evident in the 1648 Treaty of Westphalia following the Thirty Years War, the 1815 Concert of Europe following the Napoleonic Wars, and in the post-1945 era where the essentials of the current international order were adopted in the calamitous aftermath of World War II. The experience of tragedy and the recognition that action was needed to avoid it had formed a key part in the development of these international orders.

Dr Edel suggested that today, contrary to ancient Athens, tragedy and history do not inform decision making. History is viewed instead as a series of progressive elevations to the human condition, inevitably leading to an enlightened future. This has led to a sense of complacency. Dr Edel cited opinion polls which note that between 2013 and 2016, there was a jump from 52% to 57% in the number of Americans who desire an increasingly isolationist Washington. Dr Edel argued that few can remember the tragedy that drove the post-1945 international order, and that politicians and the public alike are no longer willing to bear the costs of global leadership. This is exemplified by the electoral victories of both Obama and Trump who both promised – though in very different ways – to do less to preserve and protect the international order. Owing to the confusion and lack of tragic sensibility that the defenders of the current order are displaying, and the increasingly ambitious attempts to probe the limits of this order by adversaries, the international order is entering a dangerous period.

Dr Edel suggested that we need a determination to recover the lessons of history and regain our forgotten sense of tragedy. Tragedy can teach us several lessons in protecting the international order. There must firstly be an acknowledgement that tragedy is a norm as much as it is the exception, and that tragedy is stalking international affairs. The current US-led international order faces significant challenges including from the behaviour of powers like China and Russia, and from Western European nations who are reluctant to pay a larger share for their own security. These problems must be confronted; however, states must also realise that any effort to preserve the existing order will require both partnership and sacrifice. Action will also require a sense of restraint, recognising the fatal implications of hubris.

While the existing international order is under stress, there must be an acknowledgement that it is not doomed to fail altogether. The traditional Athenian awareness of tragedy and the experiences of ancient Athens should provide inspiration to those hoping to defend the current international order as it faces a crisis not seen since the end of World War II.

In response to questions, Dr Edel did not accept suggestions that Australia’s interests in the future might best be served by closer links to China than to the US: he re-stated the importance of defending the existing world order. 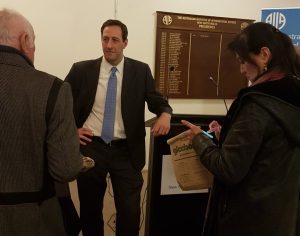 Dr Edel in discussion with audience members following his address