On Tuesday the 25th of February, esteemed journalist and author Paul Kelly spoke to AIIA NSW about the political challenges posed by climate change.

Kelly began his address on an optimistic note, highlighting recent commitments to carbon neutrality by politicians in the EU, the UK, and Australia. He contrasted these ambitious commitments with the lacklustre proposals for action that have accompanied them. Growth in carbon emissions shows no sign of slowing, and most voters appear unwilling to accept policy changes that would require short-term sacrifices in their quality of life. The Morrison government’s refusal to embrace a zero-emissions target that might compromise jobs and raise prices is indicative of a political climate incompatible with serious action.

Kelly noted that even those politicians willing to commit to ambitious targets are unwilling to provide plans for reaching them. New Zealand’s 2019 Zero Carbon Act contained no new policies for reducing emissions, and quietly exempted methane, which accounts for 40 per cent of the country’s emissions. Kelly labelled legislation of this sort a ‘mixture between gesture and fraud’.

Political opportunism is just a part of the problem. Real action on climate change also requires international cooperation, which has been fraught with problems. Kelly gave a dismal review of the UN Paris Agreement. Five years on, states have not changed their behaviour to align with the commitments they made in Paris to keep global temperature increases below two degrees. Kelly attributes this to the non-binding structure of the agreement: states were asked to nominate their own targets for emissions reductions, and there are no consequences for failing to meet those targets.

Kelly was particularly concerned with the role played by the US and China in limiting climate change. ‘It is the big emitters who will determine the fate of Paris,’ he predicted, ‘and the current trajectory is dismal.’ China is responsible for almost 30 per cent of global carbon dioxide emissions, and the US emits 14 per cent. ‘China, as ever, is the paradox.’ It is the leading global investor in renewable energy, but also leads in the construction of coal fired power plants. In the context of rising nationalism, protests in Hong Kong and declining economic performance, growth is emerging as the priority of the Chinese Communist Party, at the expense of climate action.

In the US, President Trump has announced his intention to withdraw from the Paris Agreement. If Trump is re-elected, there will be no prospect of climate negotiations with the US until 2024. However, the upcoming elections offer a glimmer of hope. All of the likely Democratic candidates have stated their support for a Green New Deal, and each of them would re-enter the Paris Agreements if elected.

Kelly also expressed concern with the new paradigm of radical climate change discourse. Activists such as Greta Thunberg have defined the climate threat as one of human extinction. Given the failure of democratic governments to prevent climate change so far, the issue is currently framed as a choice between democracy and survival. Kelly welcomed the prospect of a clean energy revolution, but was cautious about the political revolution that may be required to achieve it.

In the lively discussion that followed Kelly’s talk, several members of the audience accused him of undue pessimism. Asked about the enforceability under international law of the Paris Agreements, he was sceptical. Asked whether the Australian bushfires might be a catalyst for action, he observed that emotive responses to natural disasters have not yet been successfully translated into action. 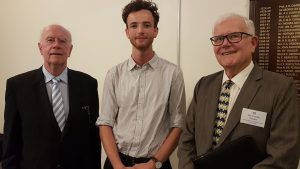