On Tuesday 27 April 2021, the Australian Institute of International Affairs NSW was addressed by Dr Merriden Varrall, a Sydney business leader who has spent over eight years in China as a researcher,  lecturer and UN official and five years as a non-resident Fellow at the Lowy Institute, on ‘The Chinese Middle Class: who are they and what do they want?’

Dr Varrall began by defining the Chinese middle class: a steadily growing, educated demographic defined by their incomes and relatively-comfortable cities of residence. She noted that China’s median age is 38, meaning much of the population never experienced the Cultural Revolution under Mao Zedong, nor broader economic and/or political turmoil. In fact, Dr Varrall pointed out that most of China’s middle class are products of the patriotic education campaign introduced by the Chinese Communist Party (CCP) after the 1989 Tiananmen Square massacre.

Dr Varrall then discussed how China’s ‘century of humiliation’, in which the country was exploited and plundered by Western powers (for example during the Opium Wars), had lodged itself into the national psyche. She explained how Western countries continue to engage in a colonial narrative of victimisation in which China was divided and made weak. Dr Varrall suggested that the continued legacy of the ‘century of humiliation’ reinforces the middle class’s notion that China must remain vigilant against foreign incursions and criticisms if it is to be an internationally-respected nation state, and that the CCP is the only party that can usher in a new era of change.

The idea that culture is inherent and unchangeable is prominent among the Chinese middle class, noted Dr Varrall. This sentiment makes them bristle at accusations of Chinese expansionism; they believe that China has been, and will always be, a peaceful nation. Furthermore, she suggested that the middle class’s belief in cultural continuity creates fixed narratives about foreign actors. For example, the US will always be understood as hegemonic, power-driven and synonymous with interference and Japan cannot shed its historically imperialist image. Moreover, Dr Varrall commented, the middle class hold very fixed ideas of who they consider ‘Chinese’, imposing a commitment on those who have a Chinese background but were born overseas.

Dr Varrall then discussed how the middle class see China’s history as prophetic of the country’s future. The Chinese government has adopted a long-term strategic outlook centred on reclaiming the country’s historical position as a global power; this is an agenda that President Xi Jinping has pursued aggressively with the backing of a strong economy. Any external criticism of the government is viewed as a continuation of efforts to keep China weak.

China sees the world as a Confucian family; a perspective that conflicts with the Westphalian model observed by other international actors, including Australia. Dr Varrall criticised Australia’s rhetoric towards China, pointing to former Prime Minister Malcolm Turnbull’s comments that he would ‘stand up’ for Australia in countering Chinese influence in our domestic politics; a turn of phrase that echoed words spoken by Mao upon the conception of modern China in 1949. These words, she argued, were ‘egregiously insulting’ to China and had contributed significantly to the deteriorating bilateral relationship between the two countries.

The CCP views criticisms from Australia with disdain, seeing us as ‘a 15th cousin’ who holds little influence on the world stage. Furthermore, Chinese authorities often meet such criticisms, particularly of its human rights record, with whataboutism, pointing to failures exhibited in Western democratic systems. Dr Varrall ended her remarks by cautioning Australia, and the West more broadly, that the Chinese middle class will not be used as tools for political dissent against the CCP, whose support for the party – whatever their frustrations – has only continued to grow.

Dr Varrall provided engaging and provocative responses to many audience questions on topics including China’s human rights record, Australia’s role in a potential conflict over Taiwan, capital flight, the limited utility of historical parallels, China’s market-oriented economy and Chinese Australians’ sentiments towards the CCP. When asked what narratives could change the attitudes of China’s middle class, Dr Varrall flipped the script and asked what Chinese narratives could disrupt Australians’ convictions in our values and way of life. In response to a question about whether Australia-China relations could recover, Dr Varrall reiterated that the two countries operate on fundamentally different belief systems, and that Australia’s current posture leaves little room for Chinese engagement. 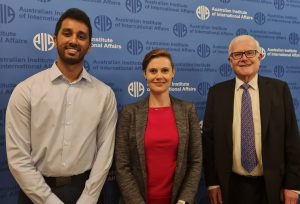