Garnaut began with a broad overview of the conundrum Australia faces in reconciling its economic dependence on China with its democratic allegiances. Garnaut noted that other countries are looking to Australia’s example when formulating their own responses to Chinese influence.

Drawing on his experience as a journalist in China from the late 2000s, Garnaut said that explaining China requires an understanding of the Communist Party’s (CCP) elite and bureaucratic politics. In the late 2000s, the “princelings” in power were divided about how to handle internal crises, such as corruption. Garnaut analysed elite politics – often family based – using a framework comparing change to continuity with the CCP’s revolutionary history. Garnaut divided the elites into factions which either thought that restoring the revolutionary heritage of the Party was the best way to solve China’s current challenges, or those who were more reform-minded and favoured empowering civil society and markets. Garnaut positioned Xi Jinping with the former and argued that Xi’s strongman style resembles Mao and informs China’s shift to a more assertive approach to global affairs.

Garnaut also used history to guide his analysis of China’s bureaucracy. He identified six core organs, including the United Front Work Department, which hold real influence and control over both internal and external security. Historically, influence and interference were central to these core security organs; the recent intensification of their extraterritorial influence aligns with Xi’s broader reinvigoration of the CCP’s revolutionary heritage.

Garnaut then turned to Australia’s response to recent evidence of United Front work. He noted the importance of carefully defining the different types of influence, distinguishing legitimate forms of influence such as soft power and public diplomacy from behaviour which is corrupt, coercive and covert; recent legislation against foreign interference targets the latter.

Garnaut addressed the potential of China deploying economic coercion in response to Australia’s pushback. He highlighted the recent example of China economically punishing South Korea for their deployment of the THAAD anti-ballistic missile system. He raises the possibility that China could retaliate against Australia’s sensitive points, such as the higher education, tourism or wine industries.

Garnaut identified this extraterritorial influence issue as an opportunity for Australia to reflect on and determine its principles and objectives and then craft strategy and tactics to achieve them. In an increasingly multipolar world where great power behaviour is rapidly changing, Australia has the agency to use its position and importance to these powers to create coalitions around specific objectives and balance the benefits of engagement while managing the risks. 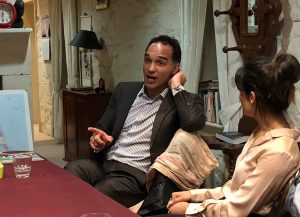 In response to questions about Australia’s current handling of relations with China, Garnaut predicted that the current cold shoulder from China was temporary. He considered that Australia’s independent foreign policy requires building solidarity and political support to oppose behaviour Australia decides is unacceptable. At the same time, he emphasised the importance of maintaining productive relations with China and finding creative ways to engage whenever objectives align.