On Tuesday 18th June, Dr Luis Angosto-Ferrández, a senior lecturer in Anthropology and Latin American Studies at the University of Sydney, addressed AIIA NSW on the topic of Venezuelan domestic and international politics.

Dr Angosto-Ferrández’s talk centred on how Nicolas Maduro, the President of Venezuela, has clung onto power. Dr Angosto-Ferrández suggested it is implausible that Maduro has stayed in power by repressive means alone. Rather, that there are a majority of people within Venezuela that either support Maduro, do not trust the leadership of the opposition, or feel the institutional processes of Venezuelan politics, which delivered Maduro re-election in 2015, should be respected.

Dr Angosto-Ferrández said some of the distrust of Juan Guaidó, the Interim-President and Opposition Leader of Venezuela, and the broad anti-Maduro opposition group, comes from their lack of respect for the country’s political institutions. The opposition have regularly boycotted or disputed the results of elections since 2000, which has called into question their commitment to Venezuelan political processes. Dr Angosto-Ferrández also highlighted that there are groups within Venezuelan society who fear that a Guaidó-led government will not govern in their interests. He explained that prior to the election of Hugo Chavez in 1998, there were people in Venezuela that, while being formal political citizens of Venezuela, they were not socio-economically enfranchised. These people lacked access to education, welfare and healthcare until Chavez’s time in power, when they were gradually re-enfranchised. This current group of people fear the opposition does not recognise them as legitimate citizens. Dr Angosto-Ferrández explained that the opposition used political symbols that are explicitly anti-Chavismo (a socialist, politically-populist ideology advocated for by Chavez and his successors that is popular among socio-economically disadvantaged groups in Venezuela), like the old seven-starred flag of Venezuela. This has ignited fears that under an opposition-led government, some people would lose their access to social benefits, returning to the pre-Chavez system that systemically disadvantaged large parts of the Venezuelan population.

On the involvement of outside countries in the Venezuelan crisis, Dr Angosto-Ferrández noted that United States sanctions have had a brutal effect on some of the poorer parts of the Venezuelan population. They have also helped consolidate support for Maduro by playing into perceptions that there is a quasi-imperialist threat from the United States. On Brazil’s reaction to events in Venezuela, Dr Angosto-Ferrández said that Brazil has taken a nuanced approach to the crisis. While Brazil recognised Guaidó as Interim President, they did not invite his representative to the recognition of ambassadorial credentials’ ceremony, showing they are still somewhat hesitant about the opposition. Brazil understands that the solution to Venezuela’s crisis will not be found in the short term, it will be a long process.

Dr Angosto-Ferrández concluded his talk by suggesting that the Western media has sometimes expressed ‘selective outrage’ about events in Venezuela. There are serious problems with Venezuela’s democratic system under Maduro, but the opposition is not free of problems either. It is important to maintain indignation at all groups when their actions do not accord with human rights or acceptable practice. He noted that foreign governments will have to recognise that both the Maduro government and the opposition are legitimate actors in Venezuelan politics, and throwing their support behind the interim government may not be the most productive path to resolving the Venezuelan crisis. Both groups will need to be involved in any solution to the crisis. 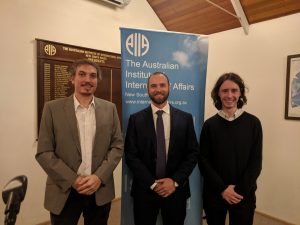