At Glover Cottages on 2 May, the first Tuesday after ANZAC Day, a timely book edited by Dr David Stephens and Dr Alison Broinowski was on show. The Honest History Book includes twenty essays by prominent Australian historians, and it is intended to fill out the details in the ANZAC ‘legend’ and in some cases correct them. The aim of the editors was to transfer the emphasis from what Australians did in war to what war has done to Australia.

Dr Stephens, secretary of the Honest History Coalition, was unable to be present, but a paper he sent was read by NSW president Richard Broinowski. In it, common assumptions about Australia having an egalitarian and multicultural society were challenged, including the elevation of Monash and Bean, and of Victoria Cross recipients, to heroic status beyond their actual, undoubted achievements. Accounts of hostility to Vietnam servicemen were disputed, as was the famous statement attributed to Atatürk about Australian and Turkish war dead, and Australia’s official denial of the Armenian genocide. 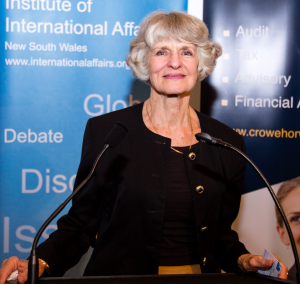 Alison Broinowski, whose concluding chapter examines the historic ‘tug of war’ between Australian militarism and independence, reflected on ANZAC Day 2017. She noted that in spite of enthusiastic media attention, numbers at marches and commemorations had fallen in Australia, France and Turkey. She speculated that the decline in war tourism may have resulted from security warnings, or because people are waiting for 2018, or because ‘commemoration fatigue’ may have set in. Nonetheless, the military industry is visibly thriving in Canberra, and several international arms manufacturers are prominent sponsors of the Australian War Memorial. Australia, she pointed out, is spending $600 million on commemorating World War I – more than countries whose countries were overrun and whose losses were greater than ours.

Reminding the audience that the ANZACs are often said to have defended Australia’s freedom, Alison pointed out that limits on free speech about ANZAC Day itself are considerable. In 2015 an SBS reporter was sacked on the instructions of the then Communications Minister, Malcolm Turnbull, for tweeting that some Australian soldiers committed rape and theft, and in 2017 an ABC presenter had to apologise for urging her social media followers not to forget Manus, Nauru, Syria, and Palestine. Alison warned that ‘Anzackery’ – Geoffrey Serle’s term – could place Australian military history above critical challenge.