On Tuesday 9 March, AIIA NSW welcomed Dr Roger Huang, an expert in authoritarian regimes and political violence from Macquarie University, to speak about the Myanmar coup. Huang began his discussion with a grim overview of the state of affairs in Myanmar: “Tatmadaw [the official name of the armed forces] is terrorising the country’s own civilians”, he explained. The civilian response to this coup has been immediate, with the current nationwide protests marking the most serious dissent the country has seen in decades, surpassing the 1988 protests and the failed Saffron Revolution of 2007. What remains unchanging, though, is the nature of the military. Indeed, it was naïve of the international community to have thought the Tatmadaw had changed.

Huang then divided the remainder of the talk into three parts, discussing in turn the Tatmadaw, the civil disobedience movement, and finally the responses of external actors. With the Tatmadaw entrenched at the core of Myanmar government, and with Aung San Suu Kyi providing them with cover of legitimacy on the world stage, the question arose of precisely why the military chose to carry out a coup. The personal ambitions of Commander-in-Chief, Min Aung Hlaing, and the increasing tensions in military-civilian relations were possible explanations, but the most important factor was the landslide election in November 2020, which illustrated growing support for the National League of Democracy (NLD). For a military that views itself as principal political actor in Myanmar, it was an unimaginable and intolerable shock to have the NLD win 83% of the seats and over 60% of the popular vote.

The military, however, had misjudged societal sentiment, not anticipating the civil disobedience movement that would follow. Ultimately, the fight between protestors and the military would be a “battle of wills and a tug of war”. In spite of the convergence among protestor groups on the need to reform the constitution and eliminate the military from politics once and for all, the likelihood seems to be that the coup will work to some extent, with the Tatmadaw able to push through its agenda and sustain its central political role.

The likely success of the coup partially emanates from the resilience of the Tatmadaw in the face of international pressure. Over the decades that the military has been in power, sanctions and condemnations brought to bear by external actors have largely failed to influence them. For countries like Australia that lack leverage with Myanmar, it was emphasised that the regime must be denied legitimacy. In practical terms, this means that Australia should cease its language, legal and military training for the Tatmadaw. Above all, this coup illustrates the obvious, that no amount of training provision or democratic engagement will change the attitude of the Tatmadaw.

A robust question and answer session then followed, with topics ranging through religion, the role of ASEAN and ethical business investment in Myanmar. In response to a question on China’s position, Huang acknowledged that Chinese pressure on Myanmar would be the most potent course of action to disrupt the military. However, Chinese involvement would remain unlikely unless circumstances escalated to a point whereby non-interference was no longer in China’s best interests. China’s influence was limited by long-standing Tatmadaw suspicions of its purposes. Russia has played a little-noticed role, for example in supplying arms. ASEAN’s response has been largely symbolic with the exception of Singapore, which has been a vocal critic of the coup.

The evening finished with a sombre warning surrounding the military’s influence on telecommunications, its growing cyber abilities, and the possibility of future punitive action against protestors, in which their activity on social media might be used against them. 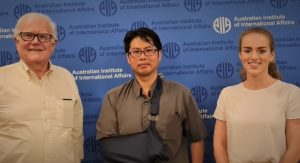