Our guest at Glover Cottages on 7 June 2016 was Adele Webb, a doctoral researcher at the University of Sydney whose thesis is about Philippine democratic ambivalence. She sees newly-elected Philippine president, Rodrigo Duterte, as hard to characterise, a mixture of Trump-like outspokenness and surprising political moderation. In contrast with his fifteen  presidential predecessors, most of whom are from established Luzon-based oligarchies, Duterte’s leadership base is Davao in the southern island of Mindanao. Among his apparently negative characteristics, Duterte is known to tolerate, even celebrate, extra-judicial killings, a practice condemned by Amnesty International and Human Rights Watch. He has a track record as a womaniser with some outrageous sexist views. He has an anti-clerical bias, and an intolerance for what he considers to be anti-social behaviour.

On the other hand, as mayor over 22 years, Duterte has turned Davao from the murder capital of the Philippines into one of its safest. Despite his intolerance for drug addicts and traders, he has built a drug rehabilitation centre in Davao, and is the first Philippine mayor to support and give political recognition to indigenous and Muslim communities. He has also reduced alcohol sales, lowered speed limits and introduced an anti-discrimination code to protect women’s rights. 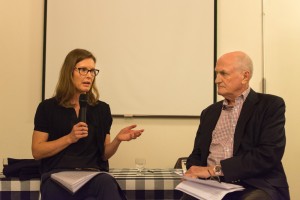 Will Duterte live up to the expectations of those who voted for him by cleaning  up systemic corruption at the national level? Adele is pessimistic. After 50 years of American democratic ‘tutelage’, Filipinos are cynical about elections. And although Duterte comes from the southern Philippines, he has the same oligarchic tendencies as his northern predecessors – a wealthy extended family and vast network of business cronies and interests. Nor is he so new to Manila-based politics. Four former presidents – Ramos, Estrada, Macapagal-Arroyo and Benigno Aquino III all at one time or another invited him to be Secretary of the Interior. His foreign policy credentials? Unknown at present. Which way will he jump on the South China Sea? Hard to predict. At one stage he threatened to ride a jet ski to the contested Scarborough Shoal and plant a Philippine national flag. At another he said he’d go to Beijing and negotiate a bilateral arrangement which would include Chinese infrastructural assistance to the Philippines. Interest in or empathy towards Australia? Unknown but not promising. He recently abused Australian Ambassador Amanda Gorely for criticising his crass remarks about a female Australian missionary who was raped and killed in a jail revolt in 1989. But, concluded Adele, nothing is yet certain. Duterte may succeed, or he may meet increasing resistance from vested interests in metro-Manila, including from the military. If the leftists in his entourage, including Communists, anger the generals, a military coup could result. Adele sees presidential elections, which Philippine voters hope will bring real changes, as only part of the democratic process. What is missing is action between elections to make politicians keep their promises.