On the 12th of November, Elliott Brennan (Research Associate at the United States Studies Centre at Sydney University) joined AIIA NSW to discuss the US Democratic Party’s prospects for attracting young voters. He debunked several popular assumptions about the 18-29 age demographic and delved into the future of their relationship with the Democratic Party.

Any discussion of US politics and the upcoming Democratic primary will naturally be complex and multifaceted, as Elliott acknowledged by pointing out that “a quarter tonne of democrats” are running for office. The race is only complicated by Trump’s ability to manufacture media narratives to his benefit, as well as external factors which affect voting trends, including media coverage of Russia conspiracies and China trade disputes.

Youth voters in the US are a particularly challenging bloc to track and are often described using the ‘Charlie Brown Theory’ – their votes are the football so often pulled away at the last moment. If mobilised, the youth vote has the potential to be incredibly powerful. Their age group makes up a significant proportion of eligible voters. In the 2018 midterms, Hispanic and Asian American turnout spiked by 13 and 14 per cent respectively from 2014 and the turnout rate of Americans aged 18-29 jumped by 16 per cent. The Democrats have traditionally owned more of the youth vote, but this has been tempered by low turnout.

Possible reasons for low voter turnout in this group include the many barriers to voting. Early voting is only an option under narrowly defined circumstances, and the designated Tuesday slot is a difficult commitment for working people, especially young people who often work in junior and/or casual roles. Very strict voter registration, residential and verification rules also pose a challenge. One example is the 53,000 voter names removed from the roll under “exact match requirements” in Georgia, affecting predominantly Black and Latino voters, many of whom had names misspelled on the roll due to clerical error. Intention to participate does not translate directly to votes.

Due to the somewhat unpredictable nature of the youth vote, campaigns have been historically hesitant to commit to appealing to the 18-29 demographic. Brennan believes that their participation this election may be different. He suggests that, as the many youth-driven protests around the world indicate, young people are beginning to realise that unless major changes occur they may not see the future they hope for. While protests occurring around the world, from Hong Kong to Lebanon, are unique, most are focused on calling out inequality and aim to address issues which strongly impact the future wellbeing of youth (such as climate change and poor gun control). Brennan also cites the rise of ‘champions’ such as Alexandria Ocasio-Cortez and Bernie Sanders, who discuss issues which feel truly relevant to youth.

The 18-29 voting bloc is not homogenous – in fact there are many faultlines within the group, and serious differences in the priorities of these voters. For example, there is a strong sense of political loss among middle and upper class White voters. Younger Republican supporters often take more extreme positions than older conservatives.

Audience members were curious about how candidates will behave as the Presidential election draws closer. Brennan believes that Trump is a formidable foe who should not be underestimated, especially considering that he has managed to hold most of his supporters.

The Democratic Party faces the challenge of balancing between their more traditional and institutional interests, perhaps represented by a candidate such as Joe Biden, and candidates such as Warren or Sanders who suggest a far more dramatic rehaul of the US political system. Democratic candidates (excepting Sanders) could edge closer to the centre in their views as the election nears. This could undermine the enthusiasm of younger voters, affecting the pro-Democrat turnout: some younger voters say if they cannot vote for Sanders or Warren they will not vote at all.

The upcoming Democratic primary will be one to watch closely. With such divisive and unique candidates, the result will undoubtedly reflect the reaction of young voters. Brennan suggests continuing to watch Pete Buttigieg and Kamala Harris – they might not prevail in this election but will almost certainly reappear down the track. This election raises the question of what it will cost to secure youth votes and how the winner will shape the future identity of the Democratic Party. 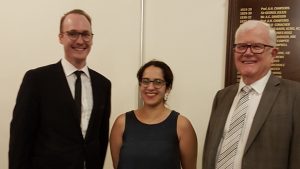