On Tuesday 11 June, AIIA NSW heard from Dr Noah Bassil, Associate Dean of Higher Degree Research for the Faculty of Arts at Macquarie University. Dr Bassil spoke about the recent uprisings in Sudan and Algeria, which have been largely characterised as a mini-Arab Spring and have resulted in the overthrow of two long-serving autocrats: Algerian President Abdelaziz Bouteflika and Sudanese President Omar al-Bashir. 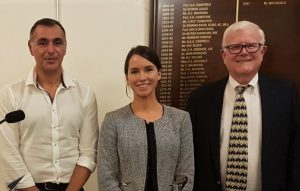 The recent demonstrations share some parallels with the 2011 Arab Spring movements, which saw a chain of revolutionary uprisings sweep across North Africa and the Middle East. Presently, protesters in Sudan and Algeria are wary of the precarious position they are in as the basic power structures behind their deposed leaders remain intact. In Egypt, this enabled counter-revolutionary movements to consolidate their power and reinstate the brutal regime under a new leader. In Libya and Yemen, civil wars have since erupted, and foreign intervention has accompanied protracted conflicts.

Wary of the fate of their counterparts’ revolutionary attempts, protesters in Sudan and Algeria are celebrating their feats with cautious optimism. They have remained on the streets, calling for the complete overhaul of the existing regimes and political structures to enable an environment open to significant reform. However, as Dr Bassil notes, both movements may struggle to remain united, as the organisations advancing the demands appear to represent the educated urban middle class and not the diverse coalition of groups who are calling for change on the streets.

Dr Bassil emphasises the role of the military in shaping outcomes. As in many post-colonial states, the militaries are key institutions embedded within the foundations of the state and society. The militaries of Sudan, Libya and Egypt wield significant political and economic power and are unlikely to support structural regime change. The ousting of their respective leaders is thus an attempt to sacrifice one of their own to ensure the system prevailed. There may be greater prospects for reform in Algeria as the military has looser connections with Bouteflika and the economy. However, similar to Tunisia’s experience, Dr Bassil suggests the Algerian military’s decision to oust their leader neither reflects a genuine alignment with the protestors nor is it a case of sacrificing their own to ensure the regime’s survival. Instead, it reflects political calculations which the military is hoping will serve their organisational interests.

Dr Bassil argues that the politics in the Arab world have been dominated by struggles between progress and reaction. This operates at both a national and regional level as the interests of foreign powers and “strongmen” are often inserted into domestic politics. Applying the Gramscian notion of hegemony helps to explain how societies in the Arab world move from consent to coercion and vice versa, depending on the forces in support of the dominant system or against it.  This paradigm has been visible in Sudan in recent weeks. Dr Bassil suggests the influence of Saudi Arabia and the UAE (strong supporters of al-Bashir) has likely played a role in shaping the decision of the Transitional Military Council in Sudan to depart from its conciliatory approach to the protestors and instead respond with violence. The death toll from this violence currently sits at 100. Fearful of democratic uprisings within their own borders, Saudi Arabia and the UAE have been attempting to revive Sudan’s pre-coup status quo under new leadership.

In addressing questions regarding what form, if any, Western intervention might take, Dr Bassil believes there would be limited direct involvement. Wary of the protracted crises in Syria and Yemen, largely due to foreign intervention, protestors may not immediately seek external support. In any case, Dr Bassil adds, it is questionable whether US assistance would be offered, given the decline of democratic reform and human rights as key foreign policy priorities, the limited domestic appetite for intervention, Trump’s cosying up to authoritarian leaders and the recent rapprochement between the US and the Sudanese government.

The initial weeks of unbridled optimism that followed the ousting of both leaders seems to have faded. There are no clear signals that the regimes in Sudan and Algeria are dismantling their own apparatus and a dangerous cycle of mass action prompting repressive responses seems likely to continue. While the revolutionary spirit continues to amass, and the protestors’ calls for civilian led change remain firm, Dr Bassil recognises the uphill battle these movements face as they navigate their demands between regime and regional interests. In this stalemate period, the ability of the diverse groups within the coalitions to remain united will be tested.