On Tuesday 16th July, Professor Michele Ford, director of the Sydney Southeast Asia Centre at the University of Sydney and professor on Southeast Asian labour movements, spoke to AIIA NSW on the development of trade unions’ participation in Indonesian elections in the twenty first century. Professor Ford outlined how the interactions between labour movements and political parties has altered in the past three national Indonesian elections, following the end of the Suharto era. In a period where democracy and civil liberties seem to be regressing in Asia, Indonesia provides an encouraging example, although Professor Ford acknowledged a ‘democratic recession’ was underway.

Professor Ford began with an overview of the Indonesian trade union environment during the Suharto era, and its subsequent transformation since the turn of the century. The success of labour organisations to achieve meaningful political reform through old fashioned protesting means, such as blockades and strikes has led to two significant advances. The first was increased labour mobilisation, and the second greater participation in domestic politics at all levels. In the post-Suharto era, unions began to reach out to politicians, promising support in exchange for favourable policies. These alliances were critical for the Indonesian working class as important labour law reforms were achieved, ranging from minimum wage improvements (in some case above 50% increases) to improved working hours. Since the 2009 election, both trade unions and political parties have begun to approach one another to create alliances and garner support. For trade unions, these alliances enable them to push desired reforms. Likewise, political candidates are able to secure more votes.

Professor Ford argued that the outcome of this wider process of democratic engagement by Indonesian organised labor is allowing working-class citizens to perceive politics as not only belonging to the realm of the elite. In Indonesia, people primarily vote for a candidate based on their personality, or their family’s history. However, the presence of new social actors such as labour unions means that constituents are now starting to vote according to the candidates’ campaign promises on specific policy platforms.

The increasing labour mobilisation of workers in Indonesia and growing power of trade unions in Indonesian politics is significant for the emerging democracy. The higher levels of voter engagement over the past three national elections in 2009, 2014 and 2019 indicates the importance of social movements in Indonesian politics, and the meaningful policy changes they can produce. Prof Ford noted that in mature democracies voting on programmatic proposals like policy change may appear obvious, but this is not historically the case in Indonesia where voting has traditionally been along lines of patronage. Armed with several case studies from these elections, Professor Ford highlighted the impact of union campaigning on people’s voting, in some cases it led to a twenty-point jump in preferences. Professor Ford concluded with the observation that wide participation in politics is fundamental to democracy.

During the Q&A section, Professor Ford emphasised that Indonesia is the Southeast Asian state with the strongest trade unions and labour mobilisation, with the potential to influence the political tactics employed by unions in surrounding countries. 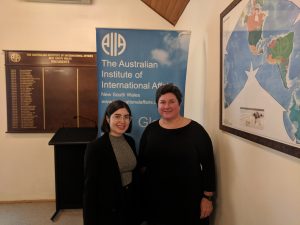