It was with great sadness that we received the news of the death of Les Rowe on 28th February, as the result of an accident.   Les made an important contribution to the Australian Institute of International Affairs Victoria (AIIAV) particularly as President from 2011 to 2013.

Les was born in Melbourne in 1945.  He was a leader from an early age, becoming captain of the three schools that he attended, including Melbourne High School in 1962.  He then went on to Ormond College at Melbourne University from where he graduated with an Honours Arts degree with a major in History (1966) and a Diploma of Education (1967).   During this time he joined the university’s Volunteer Assistance Program with which he visited PNG for the first time.

Les was one of the last of his generation to be conscripted.  He spent part of his army service teaching in PNG.  Amongst the recent tributes to Les in The Age was one from the National Servicemen (called Chalkies) who served in PNG at Igam Barracks in Lae from 1969 to early 1971.  It described Les as “a fine teacher and Sergeant Instructor who shared our tasks of educating an Army for independence”.

On leaving the army in 1971 Les joined the Department of Foreign Affairs.   His first posting was as Second Secretary in Accra, Ghana (1971-1973).  He then returned to Canberra where in 1975 he was Private Secretary to the Foreign Minister, Senator Don Willesee. 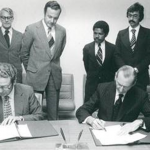 Les’s next overseas postings were as First Secretary in Lisbon (1977-78) and Chargé d’affaires in Beirut (1978-80).  From January to March 1980 he was part of the Commonwealth Observers Group in Zimbabwe.  After another stint back in Canberra he spent 4 years in New York from 1982 to 1986 with the Australian mission to the UN (starting as First Secretary and later as Political Counsellor).  As Counsellor he worked on important issues such as the Antarctic Treaty and the situation in East Timor.  In the early 1990’s he spent 3 years as Consul-General in Noumea.   From 1999 to 2001 he was the Deputy Ambassador to Indonesia (our largest overseas mission) at a turbulent time in our relationship.  His final posting , from 2002 to 2005, was as Ambassador to the Russian Federation.

Over the years he also held other important positions in DFAT while based in Canberra, including as First Assistant Secretary in charge of the Consular and Passports division.

Les retired from DFAT in 2005 and returned to Melbourne where his partner, Neil, had recently relocated from Canberra.  Although Les had not lived in Melbourne since 1971 they bought a house in North Melbourne and those who attended Les’s funeral will have learnt of their delight in living in a village surrounded by friends and close to all the cultural and culinary delights that Melbourne now provided.  Throughout his life Les was an avid art collector and the North Melbourne house was home to his eclectic collection of art from around the world.  He also delighted in working in his garden and started to learn Italian in which he became proficient as a result of regular lessons and trips to Italy (where he could also enjoy all the art and architecture).

In 2006 Melbourne was the host city for the Commonwealth Games and Les took on the role as Chief of Protocol  – a position for which he was eminently qualified.

I first met Les at the inaugural Zelman Cowen Oration in August 2006.  He was an ideal candidate to join the AIIAV council and I was delighted when soon after he agreed to do so.  He made an important contribution from the start and in 2008 was appointed Vice President  – a position he held until 2011 when he became President.   Les hadn’t planned to become President but circumstances meant that there was a vacancy which needed to be filled and he rose to the occasion.   I wasn’t on the AIIAV council at the time of Les’s presidency but I was a regular attendee at events and saw how effective he was at chairing these sessions and making everyone feel that they were welcome at the institute.   As President of AIIAV he also served on the national board of the AIIA.  As National Vice President I observed his thoughtful contributions to discussions concerning AIIA activities around the country.

The area where I worked most closely with Les was in the organisation of AIIAV Study Tours.  The first of these was in 2008 to the Russian Federation.   It was only 3 years since Les had concluded his term as Australian Ambassador so we were fortunate to have a leader who knew the country so well.   Les had always had a great interest in art and music and during his time as Ambassador he had developed a deep understanding of Russian culture – which he endeavoured to show us on our tour so that our experience was not just on the political and economic level which we would expect from a tour organised by an international affairs organisation.

It is interesting to read Les’s  report of our trip, especially in the light of what is happening at present with the Russian invasion of Ukraine.

The Russia tour had been such a success that we decided to organise another tour the following year (2009) to Indonesia – where again Les had deep knowledge from his time as our Deputy Ambassador.  As usual he put in so much time ensuring that we had an exciting program with visits to Jakarta, Bogor, Bandung, Yogyakarta and Bali.   Unfortunately, just a few days before we were to fly up to Indonesia Les was taken ill – so I had to take over.   I had only ever been to Bali but not to Java so at times I felt completely at sea.  When I had some problems  I remember that the agent in Jakarta had to refer to an agent on another island in Indonesia, who then referred to someone in Sydney, who then got onto our Victorian travel agent– who then contacted Les.   Luckily by that time he was out of hospital and able to direct things from Melbourne.  My mobile telephone bill was large!

It was about this time that Les spent a productive term as Acting CEO of Orchestra Victoria where his love of music stood him in good stead.

Our next AIIAV study tour was to Vietnam in 2011.  Although Les didn’t know Vietnam in the same way he knew Russia and Indonesia, he visited the country the year before our tour so he had worked out where we should go and who we should see.  As usual the participants were able to meet with representatives of organisations where we could learn about the political, economic and cultural aspects of the country.  This included a visit to the newly built RMIT campus in Ho Chi Minh City.  It was an interesting time to visit Vietnam as described in the report Les put together at the end of the trip

The final tour that Les (who by then was AIIAV President) led, with me as his deputy, was to China in 2012.   We were there in May just before Xi Jinping was set to become leader in October of that year.   At that time there was so much optimism about the relationship between China and Australia as Les’s report indicates.  So much has changed since then but that doesn’t mean that what we saw and hoped for in 2012 isn’t relevant today.

The reports which Les prepared for the AIIAV after each study tour reflect all his training as a diplomat and specialist in international relations.  They are an important part of AIIAV archives.  (Links are included above to the Russia, Vietnam and China reports).

All Les’s study tours were popular not only amongst members of AIIAV but from other AIIA branches around the country.   These tours are an example of how the AIIA fulfils an important role in public and citizen diplomacy via people to people exchanges.    Les’ s voluntary contribution also enabled AIIAV to make a profit on these tours – which allowed us to maintain our services in other areas.

Les was not only a leader on these tours  – he became a friend of everyone who participated as well as many other AIIAV members.   Many of those based in Victoria attended his funeral on 11th March at St Mary’s Church in North Melbourne, including AIIAV President, Richard Iron, and Executive Director, Alastair Roff.  Some of Les’s former colleagues came from Canberra and elsewhere for the service, including AIIA NSW President, Ian Lincoln.    Many also watched the video link to the service.   This link is still active for those who are interested:  www.vividstream.live/leslie-rowe

During the service we listened to eulogies delivered by five friends who had also spoken to many other people when preparing their remarks about Les.  He was described as someone with “warmth that was so genuine” and with “no pomposity or self importance”.   He was “multi-cultural, cosmopolitan and anti-racist”.  He was “deeply Australian” and “someone who loved our quirkiness and our achievements”, a “decent human being with a sense of humour and the ability to laugh at himself”.   He was also “genial, witty and good company” and he was “interested in so many things”.

He was a friend to so many and we will all miss him so much.   He died just after Russia invaded Ukraine and so often I want to pick up the phone and ask him to give me his impression of what Putin is up to.   One thing we learnt at the funeral was that Les had warned 20 years ago when he was stationed in Russia that Putin was a “dangerous tactician”.

Zara Kimpton OAM was President of AIIAV from 2003 to 2006 and was made a Life Member in 2008.  She is now National Vice President of the AIIA. 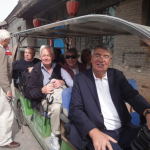