On Tuesday 15 June, AIIA NSW welcomed Dr Diarmuid Maguire, an expert in ethnic conflict from the University of Sydney, to speak about Northern Ireland after Brexit. Maguire began by reflecting on the significant timing of his talk. 2021 marks not only the 100th anniversary of the “uneasy and violent establishment of Northern Ireland” but also a year since Britain’s formal departure from the EU.

Thanks to the 1998 Good Friday Agreement and the many actors involved – the British and Irish governments, but also the EU and US who acted as facilitators and guarantors of peace – Northern Ireland, for the first time since 1921, gained widespread legitimacy. Borders were rendered effectively invisible and sectarian violence was virtually eliminated in Northern Ireland.

Brexit, however, endangers all this. 2021 has witnessed the return of violence on the streets of Northern Island, breaking 23 years of relative peace.

Because Brexit now “threatens the stability of Northern Irish politics”, both the EU and US are putting diplomatic pressure on the UK to uphold the Good Friday Agreement; the US – which played an active role in bringing about the agreement – has even issued a formal diplomatic note to this effect.

With the contradictory tenets of the Good Friday Agreement and Brexit thus illustrated, Maguire outlined contemporary developments. In Britain, Johnson’s government has threatened to renege on the Northern Ireland Protocol, arguing that the UK and Northern Ireland are separate sovereign entities and calling on the EU to relax its “legal purism”. In Northern Ireland, the consequences of Brexit are evident in the decision of Unionist paramilitaries to disavow the Good Friday Agreement and, of course, in the weeklong riots in April where Unionists once again took to the streets, provoking Nationalists to respond in kind. There are many among the Unionists who would be happy to see the Good Friday Agreement collapse; their uneasiness is fed by the prospect of the Catholic population becoming more numerous than the Protestant one in the near future.

In concluding, Maguire reflected on the prospect of violence erupting in Northern Ireland as the July-August “marching season” approaches. The combined efforts of the US and EU, conflict prevention mechanisms such as the Northern Irish Office and the international legal status of the Good Friday Agreement may be enough to prevent the outbreak of more violence. Should conflict re-emerge, however, three factors will be causal, with Brexit lying at the heart of each. The first factor is the initial decision of David Cameron’s government to call the Brexit referendum without considering the consequences for Northern Ireland. The second has been the government’s lackadaisical handling of the Irish aspect since the Leave vote in 2016. The third and overarching factor is the “structural contradiction” between Brexit and the Good Friday Agreement that makes the issue so complex, even intractable.

A robust question and answer session followed, with topics ranging from the influence of religious figures to soft diplomacy between Northern and Southern Ireland. In response to a question on the Labour party’s position on the Northern Ireland Protocol, Maguire voiced his disappointment that there seems to be bipartisan consensus, with Labour broadly following the Conservative line, to the detriment of the Good Friday Agreement.

With regard to the potential break-up of the UK associated with pro-EU majorities in Northern Ireland and Scotland, Maguire assessed that Scotland is more likely than Northern Ireland to gain independence at this point, with a Northern Irish referendum on the matter probably a decade or more off. In the event of a united Ireland, a federal arrangement between North and South may be likely in order to ameliorate funding issues and Protestant discontent at any prospect of Catholic domination.

The evening ended on a lighter note with discussion of the joint Irish cricket and rugby teams, though the real indicator of Irish unity would be a joint soccer team – the likelihood of which remains remote. 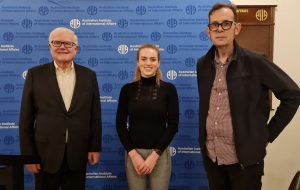