On Tuesday 25th October, the Institute hosted Dr James Cockayne, the newly-appointed NSW Anti-slavery Commissioner. Dr Cockayne draws on a wealth of knowledge and experience as an international lawyer previously working with the UN on international crime and as a professor in global politics and anti-slavery studies at Nottingham University.

When one hears the word slavery, the modern labour market is not the first thing to come to mind. Dr Cockayne however was able to break this illusion: he discussed modern slavery and its varying international and domestic properties. Currently there are over 28 million people believed to be enslaved – working as forced labour in oppressive conditions, grossly underpaid, without legal rights, and without choice or basic freedoms.

Modern slavery is different from the chattel slavery of the past, in which people had a legal right to own other people. But in modern slavery, employers have de facto powers over their workers which amount to similar restrictions on their freedom and rights, extending even to imprisonment. This is not confined to the third world: in Australia we have slavery-like conditions in such areas as berry picking in northern NSW, cleaning and domestic work, and the sex industry.

The nature of the globalised, liberal international order facilitates modern slavery. As international trade has become more global, modern slavery has been rising – it is estimated by as much as 20 per cent over the past five years – facilitated by the availability of temporary migrants with few rights.

Globalisation complicates action by individual countries against modern slavery. With its many boons, globalisation also has flaws, one of them being a separation between consumers and producers. Long supply chains mean there is little knowledge of the conditions under which goods and services are produced. This creates an “empathy and accountability gap” in which modern slavery flourishes.

There is a general unawareness in the Australian market of where products and their components are made or what portion is contributed to by slave labour.  And there is no easy response. In the fashion industry, for example, if one country rejects imported clothing produced under harsh conditions and turns to making them locally, domestic prices will increase while the cheaper product will readily find markets elsewhere.

One solution is international action: countries including France, Germany, New Zealand and the UK have set up disclosure requirements on internationally-produced goods. We need to ask ourselves “what price freedom?” What additional consumer and regulatory costs are we prepared to bear in order to turn away from the products of modern slavery?

Factors such as Covid-19, environmental disasters and international political crises have created vulnerable populations across the world that have been taken advantage of. Corruption and slavery go hand in hand with the economic model embodied in the current international order, in which both governments and enterprises often cooperate to reap the rewards of exploitation.

An example of modern slavery is in China’s Xinjiang province, home to a significant portion of central Asia’s Uyghur population, a majority Muslim, Turkic ethnic group. This group is facing increasing persecution by the Chinese government: it places them in re-education camps under the guise of re-skilling them for industry needs. This approach has been criticised as cultural genocide as reports emerge of these camps deliberately stripping the Uyghur of their unique identity and in extreme cases condoning sexual and physical violence against them. This vulnerable population is used by the local Xinjiang factories, with government endorsement, as cheap labour to supply the global market with products such as poly-silicon, a vital material in the production of solar panels.

This is but one example of the modern slavery which is feeding our global markets. We have entered into an era of systematic competition that values profit over ethics. This can be reversed however with better regulation of our supply chains and higher awareness being brought to businesses on the prevalence of modern slavery.

Dr Cockayne responded to a range of audience questions.

Asked about the realism of prohibiting products of slave labour in Australia, particularly in solar panel production, he said that it is currently incredibly difficult to purchase slave labour free solar panels as most poly-silicon is sourced from the Xinjiang factories. Switching to alternative components is not realistic and doesn’t remove this problem. There are plans to establish our own poly-silicon factories but the resources and time investment required are enormous.

In NSW since 1 July, government buyers must cease buying goods and services made by modern slavery. The government places responsibility on large enterprises to ensure that they are not directly or indirectly supporting slave labour and requires an annual internal anti-slavery investigation for enterprises turning over more than 50 million in revenue.

Asked whether it is necessary to have both state and federal anti-slavery commissioners, Dr Cockayne said that the federal and state governments have different areas of responsibilities. Cooperation in all these areas is necessary to combat modern slavery. Action at all levels of government among the education, health care, foreign relations and economic policy departments is crucial in ensuring the Australian economy has a firm anti-slavery stance. 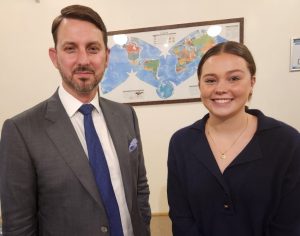