Our guest speaker at Glover Cottages on 22 August 2017 was Tom Sinkovits OAM, an experienced Australian immigration officer, now with the UN International Organization for Migration (IOM).

Tom’s narrative about global migration flows was daunting. Displacement from the Middle East and North Africa region surpasses any other. Of 65.3 million people forcibly displaced, 39% originate within Middle Eastern countries, 29% from Africa and 15% from the Asia-Pacific. Fifty three percent of all refugees come from Syria and Afghanistan.  Turkey, Pakistan and Lebanon are the top receiving countries. Australia and European countries tend to characterise their refugee intakes as uncontrollable, but the numbers they receive are miniscule compared to much poorer MENA countries.

Tom urged the audience to think of migration as a continuum with three phases: from origin to transit to destination. Contrary to the assumption that Europe is the default destination for all migrants, a huge number of migrants in the MENA region head toward Libya, with its porous borders and a continuous demand for foreign labour. Moreover, after the 2016 refugee deal between Turkey and the EU, Turkey has stopped being a mere transit country for Syrian asylum seekers wishing to enter Europe, and has become a destination in its own right. 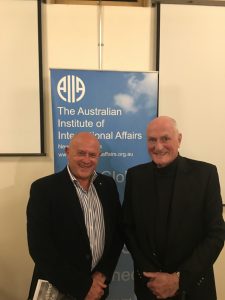 Meanwhile, Tom observed, the media and some politicians tend deliberately or otherwise to misuse the terminology of migration. Contrary to internationally accepted definitions, they tend to smear all legitimate refugees as illegal. There are distinctions between ‘refugees’ and ‘asylum seekers’, and between ‘smugglers’ and ‘traffickers’. He also preferred the term ‘irregular migrant’ to ‘illegal migrant’, given that the right to seek asylum is universal. Undocumented migrants are not necessarily illegal in all circumstances.

Tom challenged the perception that migration is just a problem or challenge. It has practical benefits for receiving and sending countries. Egypt receives $27 billion annually in the form of remittances from migrants, which is more than it earns from foreign direct investment and tourism combined. He also mentioned benefits to the burgeoning economies of Gulf Cooperation Council (GCC) countries that Indian, Bangladeshi and Nepalese labour migrants provide.

In conclusion, Tom lamented the militarisation of Australian migration policy. This was retrograde step that did not accord with our innovative history of treating migrants as beneficial rather than invasive, an economic opportunity rather than a threat to our security.