On the 8th of October 2019, AIIA NSW welcomed historian and former diplomat Dr David Reeve to speak on a transforming Indonesia under the second term of Joko Widodo (Jokowi) as president.  His talk preludes a pivotal point in Indonesia’s history: over the next five years, Jokowi’s visions may engrave him in the history books.

Dr Reeve described the election in April of this year as bitter and deeply divisive. Jokowi lost ground in several provinces – his victory came from places where he was already popular whilst a growing antagonism to him grew in the Muslim devout areas (although the Islamic vote in Indonesian elections had remained broadly stable over many decades). Despite the friction between parties, the programs and policies offered by both Jokowi and his opponent Prabowo Subianto fostered shallow contestation; discussions over national reforms were replaced by personality politics. Words such as ‘strong’, ‘devout’, ‘capable’, and ‘honest’ saturated campaigns. Dr Reeve labelled this as the ‘rebirth of the adjective’. Such connotations underscored Jokowi’s name in the eyes of 55.50% of the population.

Jokowi’s vision for Indonesia can be summarised into a five-point program. Dr Reeve commented that they could have been dictated by an international bank or foreign advisor; they foreshadow the creation of a free-fight capitalist society heavily dependent on the West. The program consists of infrastructure development, human resource development, ease of investment, bureaucratic reform, and revising the budget to incorporate universal cheap health care and education. Relocating the capital from Java to the forests of Kalimantan is just one of the far-reaching ventures under this agenda.

The rigid bureaucracy that Dr Reeve describes as resembling an 18th century Javanese Kingdom poses one great obstacle to his grand plan. Jokowi’s inability to control regional administration is evinced through his mishandling of the fires that rage uncontrollably across the nation. Jokowi and his ministers have avoided addressing the unsettled disputes and discontents experienced by the West Papuans that create riots almost every day.

Dr Reeve set Indonesian policy making in the context of a perceived ‘proxy war’ by western and other countries. This idea holds that by 2050 the world will be energy-scarce and frantic for Indonesia’s resources. Even Indonesia’s current hostility to LGBT and other minority rights could be seen in this context: such rights were experienced as foreign attempts to attain greater control in Indonesian society by sapping Indonesians’ morale.

In question time, Dr Reeve explored the fate of Indonesia’s Muslim population under Jokowi’s tenure. Practicing Muslim and vice president Ma’ruf Amin has assisted Jokowi in attaining a reputation for accommodation towards all Muslims. He added that Jokowi, as an ‘insider’ with a strong understanding of civil society, has been successful in galvanising a deeply xenophobic nation. An audience member questioned Dr Reeve on Jokowi’s perspective on foreign policy: Dr Reeve responded that Jokowi has little interest in broad international issues; he sees foreign policy primarily as a tool for building the economy – not for creating a new world. For instance, much of Indonesia’s engagement with China has been based on obtaining loans for infrastructure.

He commented that Jokowi will likely form a strong bond with Scott Morrison on the grounds of economic benefits; Jokowi thinks very much as a businessman. Dr Reeve highlighted that conventional diplomacy is second to Jokowi’s primary vision: accelerating Indonesia’s economy to 4th place in the world. 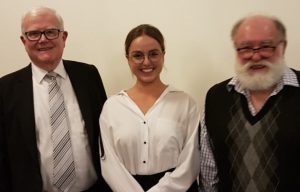