On Tuesday 3 March 2020 the Irish Consul General in Sydney, Owen Feeney, spoke to AIIA NSW about Ireland’s approach to Brexit and its implications for its continued relationship with the United Kingdom. Drawing on his long-standing role with Ireland’s Department of Foreign Affairs and Trade, Feeney provided an insightful view for our audience into Ireland’s role globally.

Ireland had joined the EU in 1973 – it was “a home Ireland had helped to build”. Irish membership was supported by 93 per cent of the population, across all parties. Irish regret at the UK’s departure was widespread, including in Northern Ireland.

Feeney pointed to four key considerations for Ireland during the Brexit negotiations: maintaining the Good Friday Agreement peace process; preserving provisions for free trade and common travel between the United Kingdom and Ireland (including continued access for the northern Irish to both EU and UK travel rights); reaffirming Ireland’s place in the European Union; and ensuring that the Irish economy is supported and continues to prosper on a global scale.

Feeney emphasised the importance of the Good Friday Peace Agreement of 1998, which ended the long-standing conflict in Northern Ireland. This peace must be prioritised both now and into the future. This made avoiding a hard border between north and south a key concern, given the historical symbolism associated with border crossings and their role as a focus for past conflict. Feeney also outlined Ireland’s priorities for the future EU relationship with the UK. With trade as a priority between the European Union and the United Kingdom, upcoming negotiations will aim to ensure that a balance is found between controlling goods entering and exiting both Ireland and the UK without undue restriction.

Feeney outlined Ireland’s global push, with 26 new embassies and consulates to be opened by 2025, including strengthening existing missions in EU countries. With over 70 million people globally claiming Irish heritage (compared to a population within Ireland of 7 million) the Irish influence globally has always been strong, reflected in cultural events such as St Patrick’s Day which attract world-wide participation. An enhanced network of Irish embassies and consulates across major regions will add to pre-existing bonds in an increasingly globalised world.

Ireland is increasingly cementing its place as a global player in the world’s economy. Its exports are currently estimated to be worth $219 billion annually. Ireland brings in the majority of its GDP from the services industry – particularly finance, technology and pharmaceuticals – as can be seen in the rapid rise of ‘Fineos’ which was listed on the ASX in August 2019 and was awarded Australia’s largest foreign stock market listing in the same year. With Ireland having a young, highly educated population there is great potential for future economic growth in the close relationship between Ireland and Australia.

In response to questions, Feeney said that Ireland is among many countries competing for international investment and operates a fully transparent taxation system.  Ireland’s multi-step approach to military engagement, requiring the government to obtain the approval of parliament, gained a round of applause from the audience.

Feeney predicted that, while Brexit will change Ireland’s relationship with the United Kingdom, it is unlikely to hinder Ireland’s global push as it expands its diplomatic reach and strengthens its international economic ties. Now is the time for Australia to recognize Ireland’s potential and cement a strong future relationship with a close partner whose place in the European Union is reaffirmed. 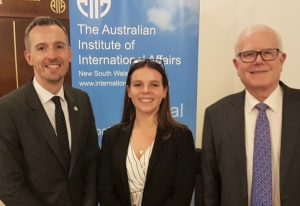