On Tuesday 10 August 2021, the Australian Institute of International Affairs NSW was addressed by Dr Ned Dobos, Senior Lecturer in International and Political Studies at the University of New South Wales (at the Australian Defence Force Academy). His focus was on the ethical challenge of warfare and the role of human psychology in the over-use by states of their military power.

Dr Dobos opened by remarking on the moral impermissibility of pre-emptive conflicts under the application of Just War Theory – an ethical framework for determining whether there is acceptable reasoning to go to war (jus ad bellum), and if so, the question of how the war should be conducted (jus in bello). The theory posits that war should be a last resort and must be proportionate, limiting the extent to which war occurs and the damage it causes.

With respect to Iraq and Afghanistan, Dr Dobos argued neither met the criteria to be considered a just war, as America’s pre-emptive approach at the start of the conflict “showed no real appetite” for alternate peaceful resolutions. Dr Dobos said this would not allow the Iraq conflict to be considered just, even if weapons of mass destruction had been found, because war must be justifiable from the outset. Political leaders have a propensity to use military force inconsistently with just war theory; even the best motivations have downfalls.

Dr Dobos spoke to the psychological predisposition of humans to hold greater appreciation for their abilities than is objectively justified and to underestimate the likelihood of adverse outcomes. Every war from 1815 to 1914 was contested by parties that each believed victory was guaranteed, usually in a few months. US Defence Secretary Donald Rumsfeld’s assistant Kenneth Adelman’s reference to an invasion of Iraq as a “cakewalk” showed that these biases remain in the twenty-first century. They were combined with the fact that political leaders who make decisions to go to war have other economic, domestic political and alliance-based agendas.

Although a key pillar of Just War Theory is that there ought to be a good chance of victory, a significant problem arises as inherent cognitive biases cause leaders to judge potential success more likely than it may be in objective reality. This led to one of Dr Dobos’s main points: the people charged with determining whether to go to war can’t make an impartial assessment of whether recourse to war is ethically justified. History has shown “unjust wars have been the rule” and “just wars the exception.”

In suggesting how the mistakes of the wars in Afghanistan and Iraq could be avoided in the future, Dr Dobos said electing morally-aware leaders and providing “just war training” would not be enough. He opted to explore what he called the “nuclear option” – abolishing militaries. “The best means to avoid trouble is to deny the ability to get into it” he said, referring to the example of Costa Rica which abolished its military in 1948. Dr Dobos challenged the assumption that greater military strength equates to greater national security, employing a domestic scenario that revealed the trade-off between weapons providing self-defence to deter aggressive parties while inviting challenge from paranoid parties wanting to neutralise a perceived threat.

In concluding his address, Dr Dobos pointed out society’s proneness to overestimate the national security benefits of militaries: he encouraged more careful consideration of how military force may decrease security.

An insightful Q&A session followed, with Dr Dobos’s responses exploring the need for humanitarian interventions and the effect of rising private military contractors on ethical recourse to war. Asked whether the First Gulf War could be considered a just war, he settled on the view that, despite contrary arguments, the asymmetric nature of the coalition force was not necessarily permissible. He emphasised that another fundamental element of just war theory is proportionate military force relative to the opposing party. The great social and political chaos inflicted on the Iraqi people by foreign forces were highly disproportionate in Dr Dobos’s view, with compounding impacts over the long-term.

On the question of American exceptionalism, he referenced the Bush Administrations’ strong rhetoric against the axis of evil (Iraq, Iran and North Korea) as triggers for such states to further develop their military capabilities. Many American allies expressed disquiet at this build-up, but the same allies voiced less concern over the concurrent invasion of Iraq. Dr Dobos suggested that this showed that US pre-emptive military action is more palatable to much of the international community than similar action by other states. 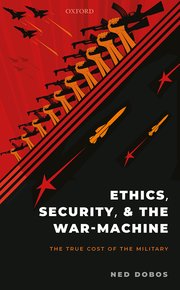