On Tuesday 21 March 2021, the Australian Institute of International Affairs NSW was addressed by Professor the Hon Bob Carr, Industry Professor at the Institute for Sustainable Futures and UTS Business School, former Australian Foreign Minister and former Premier of NSW.

Professor Carr began by admonishing Australia for its current position on climate change, claiming that Australia faces “diplomatic isolation on climate”. He observed that, while the US, China, the EU, the UK and Japan are being drawn together by climate action, Australia is “simply not there”. He invoked the US climate envoy appointed by President Biden, John Kerry, who has stated Australia has “not been able to get on the same page” as the US on climate issues. Professor Carr asked pointedly “why shouldn’t we be?”, especially as the US and the UK move to put climate at the centre of their foreign policy.

Professor Carr stated that our position in the international community on climate issues is akin to those of Saudi Arabia and Brazil, in stark contrast to our self-perception of having the diplomatic style of a creative middle power. He noted that our position leaves us potentially exposed with our Pacific neighbours. He criticised the Prime Minister Scott Morrison for promoting new gas projects.

Professor Carr painted a bleak picture, asking what might occur if the climate crisis accelerates and noting that nature does not obey our statutes. He questioned what would happen if tipping points arrived earlier – the reversal of the Gulf Stream, the release of Arctic methane deposits, the bleaching of the Great Barrier Reef. He argued that the result would be “a real revolt by youth”, accompanied by a dramatic shift in capital allocation towards a total abandonment of fossil fuels and the speedy imposition of climate tariffs (for example by the EU) on high polluting nations.

Professor Carr characterised the past 12 months as a dynamic year of exceptionally consequential change, which saw nations like South Korea, Japan and China move to more ambitious net-zero targets, as well as the election of President Biden in the US. Professor Carr assessed that Biden is well placed, as a long-time bipartisan negotiator with an international standing, to work for a good agreement at COP16 in Glasgow. Biden has already moved decisively, directing the heads of all federal government departments to end any fossil fuel subsidies on 27 January, and is moving to force corporate leaders to act within the next decade.

While noting a level of disappointment with the ambitions of China’s five-year plan on climate change, Professor Carr believes that Chinese bureaucrats are working to update the plan to bring it into line with Chinese President Xi Jinping’s commitment to net-zero emissions by 2060, made last September at the United Nations General Assembly. Professor Carr lamented Australia’s lack of a productive relationship with China, and our consequent lack of collaboration on solar panel manufacture or the development of hydrogen power. He emphasised the importance of China and India transitioning to green energy generation in any international climate action. He suggested that Indian PM Narendra Modi may move to a 2047 net-zero target, with assistance from the OECD, to mark the centenary of the Republic.

Professor Carr believes developments like the EU proposal for a carbon border adjustment mechanism will “collect freeloaders like us and make us pay”. He argued that any government in Canberra exercising “normal cautionary principles” would see that it was in their best interest to take action: “we no longer have the leave pass we had under Trump”. Rounding off his remarks, Professor Carr argued that Australia needs to move to a 2050 net-zero target, with ambitious intermediate targets, and follow the US and UK in adopting a climate-centred diplomacy.

In response to a question on nuclear power generation, Professor Carr said this was perhaps an option some years ago but the increasingly lower cost of other renewables has now made it irrelevant. Nuclear waste storage had not proved politically feasible anywhere in Australia. Asked how Biden might go about passing his climate agenda with the narrowest of majorities in the Senate, Professor Carr replied that the best course would be for a strong Democratic showing in the mid-terms. Asked about how to practically influence change in Australian government policy, Professor Carr suggested a concerted movement of lobbying Liberal Members of Parliament, especially in marginal electorates. 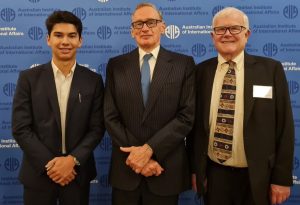