On Tuesday 23rd August 2022, AIIA NSW hosted Ms Yun Jiang, the inaugural AIIA China Matters Fellow, at the Glover Cottages. In her address she elucidated the concept of values in foreign policy, including whether Australia could live up to the values of a rules-based order within the context of great power competition.

To kick-start the discussion on what ‘values’ entail in Australian foreign policy, Ms Jiang highlighted that both the previous and current governments have reiterated the necessity of not compromising Australian values while engaging with China, and that Australia does not “have a shared value with China”. She noted this position was adopted in part because of China’s poor human rights record and its authoritarian, communist style of governance. In that context, the previous Australian Government’s description of its relationship with Vietnam as “one of shared values” was shocking since Vietnam was not much different from China in terms of human rights violations and authoritarianism.

Ms Jiang spoke about the need to comprehend the definition of values in foreign policy and explained that for Australia, values seemed to revert to “promoting democracy and a rules-based order”. According to Ms Jiang, these values in their purest form, should necessitate advocacy for foreign policies with the potential to improve both democracy and human rights in Australia and in other countries of the world. They would also actively focus on strengthening international rules and norms through a “country-agnostic” approach, whereby Australia would condemn human rights and international law breaches regardless of the concerned country’s power status and relationship with Australia.

Ms Jiang then exemplified the uncomfortable relationship between values and power by talking about the ongoing export of weapons from Australia to Saudi Arabia despite its human rights abuses. She also talked about how Australia does not condemn democracies, simply in the name of upholding the value of furthering democracy. For instance, it does not condemn India for its flaming Hindu nationalism or the US for its democratic backsliding. To conclude her address, she reiterated that the maintenance of this strange values-power relationship, in the sense that values can be sacrificed for the sake of power in the context of a zero-sum geopolitical context, would lead to the opposite of what Australia expected to foster, ie lesser democracy and a weaker rules-based order.

During a lively question and answer session, Ms Jiang was asked what the rules-based order meant. She explained that it generally meant that countries abided by international rules, international laws and international norms, which could be both mutually inclusive and exclusive as per a given country’s will. She also spoke about how they combined to form a way for Australia as a middle power country to constrain power but that the great powers had greater scope to exercise their will. On the question of whether a rules-based order could be used to impose a hegemonic power position, Ms Jiang asserted that it certainly could, since sometimes great powers willingly subjected themselves to a given rule in order to set an example for others. 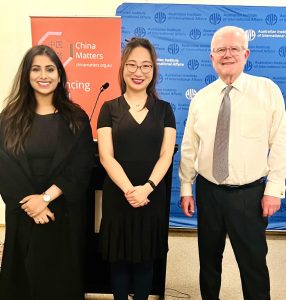