On Tuesday 18th February, Peter Hartcher, a leading Australian journalist and author, spoke to AIIA NSW about managing Australia’s relations with China in the year ahead. Drawing on his Quarterly Essay titled Red Flag: Waking up to China’s Challenge, he outlined his motivations for writing the book, the implications of the CCP’s influence in Australia and ways Australia can defend itself against foreign control.

The sheer magnitude of China’s growth in this century has been unprecedented and its journey towards being a superpower has fundamentally changed the global economic order. Australia has been a major beneficiary. China spends $11 billion per year on both tourism and education in Australia and is the biggest consumer of Australia’s raw products, with two-way trade expanding by 17.5% in 2018.

Less discussed is Australia’s exposure to political intrusion as a result of an over-reliance of trade with China. In a nod towards the traditional Chinese preference for having things in neat numerical packages, Mr Hartcher provided three examples of the CCP’s attempts to exert political interference. First was Joe Hockey, at an APEC meeting in 2013, two days into his position as Treasurer, being asked by China’s finance minister Lou Jiwei why he could not buy Rio Tinto, or as an alternative 15% of every ASX200 listed company. Second was ALP front bencher Stephen Conroy being told that if he did not change his position on the South China Sea, the NSW Labor party was to lose $400 000 in donations. Third was a member of the Politburo allegedly threatening that, if three senior leaders of the federal Labor Party – Penny Wong, Bill Shorten and Richard Marles – did not approve an extradition treaty similar to the one that ignited the Hong Kong protests, then Chinese Australians would be told that Labor did not support the relationship between Australia and China.

While Australia successfully resisted efforts by Chinese agents at intrusion on these occasions, it begs the question of how many other interference attempts have been successful. One of the CCP’s most powerful weapons is the United Front Work Department whose publicly stated goal is to extend Chinese influence across its diaspora. Over 300 such associations exist in Sydney alone, taking the form of community groups, business chambers and student societies. Mr Hartcher noted that the turning point for his decision to pen the essay was a warning from the former chief secretary of Hong Kong, Anson Chan, that “[b]y the time China’s infiltration of Australia is readily apparent, it will be too late”.

The audience was particularly interested in the loyalties of the 1.2 million Chinese-Australians. Rather than falling into pro- and anti-Beijing groups, sympathies tend to be divided among those who had immigrated in the 1980s and 1990s, with Tiananmen Square still fresh in their memories, and the noveau-riche who have only recently made Australia their home. It is natural that immigrants are sympathetic towards their home country, but the Chinese government is the one which has most actively and successfully wielded influence over its ethnic group. Despite this, in an illuminating incident, numerous Chinese-Australians themselves rose in protest against a concert celebrating Chairman Mao that was to be held in Sydney.

That the Chinese-Australian community feels valued, especially amidst the xenophobia sparked by the COVID-19 outbreak, is of paramount importance. Greater efforts by politicians should be made to follow in the footsteps of Premier of Queensland Annastacia Palaszcuk and Sydney mayor Clover Moore, who both made public statements of support during Chinese New Year.

There are policies the Australian government should enact to leverage off the destabilisation created by COVID-19. The first is to strengthen Australia’s democracy: federal political donation laws are some of the laxest in the developed world. In addition to repairing election campaign funding laws, a federal ICAC should be established and all new Members of Parliament should be subject to ASIO security clearance. To mitigate against fractures in the trade relationship, Australia should meaningfully diversify its export base and have its tertiary institutions place a portion of international student fees in an investment fund, as the University of Queensland has done. Bipartisan efforts to pass two new pieces of legislation – the National Security Legislation Amendment (Espionage and Foreign Interference) Act 2018 and Foreign Influence Transparency Scheme Act 2018 – followed by a recent announcement of $40 million in funding to enforce these laws, are positive steps in the right direction.

The path forward is one where firm boundaries are set against the CCP’s attempts at interference and control but a mutually beneficial relationship can still flourish. Combatting climate change, lifting living standards in the Pacific Islands and defeating the harms of drug trafficking, piracy and terrorism are all bilateral concerns rich in potential for collaboration.

Australia has undeniably gained from the economic prosperity of China. With the US receding from its self-imposed position as the bastion of democracy and free market values, Australia must be prepared to stand on its own two feet in deciding what is in its best interests. 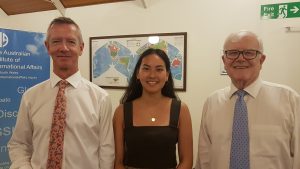