On Tuesday 26 February, Hervé Lemahieu, Director of the Asian Power and Diplomacy Program at the Lowy Institute, addressed the AIIA on the possible future balance and distribution of power in the Asia-Pacific. His projections were based on the findings of the 2018 2018 Asian Power Index, an analytical tool that uses over 100 indicators to measure power in 25 countries in the Asia-Pacific including the US, Australia, China, Russia, Japan and New Zealand.

Despite the ascendancy of China and the retrenchment of the US from the Asia-Pacific becoming major concerns for policymakers, Mr Lemahieu noted that the Index’s data shows the US will remain the leading regional power to 2030. While China’s economic rise does pose significant costs for the US, it lags behind the US in other indicators including diplomatic and cultural influence and defence networks. Mr Lemahieu also suggested that middle powers will emerge to negotiate the resulting strategic gridlock and seek to maintain their relative advantage within the existing multilateral system. This includes what the Index calls ‘overachievers’, or nations who have a greater influence in relation to their size including South Korea, Australia and Singapore.

Mr Lemahieu recognised that there is a possibility the US will commit to long-term military and economic competition with China and shift towards zero-sum geopolitical rivalry. In terms of military competition, the Index suggests the balance of power still rests firmly in Washington’s favour. Even in the event of a hot war, China remains militarily vulnerable not only because of the rapid increase of regional military spending, but also due to its limited military partnerships in the region and inability to project its military power over large distances. Mr Lemahieu remarked, however, that while China’s military expenditure is a distant second to the US, future trends imply that Beijing could rapidly catch up with the US even considering possible negative impacts of increased defence spending on its GDP.

Economically China remains dominant in the region, and Mr Lemahieu indicated that any zero-sum competition may have a more adverse effect on the US and the region than on China. East Asian markets and Chinese companies are increasingly driven by non-Western demand, and data implies China would remain less vulnerable to trade repercussions in a possible cold war with Washington despite possibly losing 8% of its GDP by 2030. The strategy of ‘economic decoupling’ which President Trump has pursued would also be an increasingly hard sell for the region given China’s centrality in regional trade and investment. While the US possesses numerous strategies to encourage economic decoupling, the Asian Power Index data suggested that Trump’s pursuit of economic decoupling and preoccupation with bilateralism would do little to stem China’s continued growth.

Mr Lemahieu noted that the US can only do so much to bide time and prevent China’s inevitable ascendancy. Although the US does have significant multilateral advantages over China, it cannot continue to rely on Cold War-era strategies to contain Beijing. Instead, Washington should work in cooperation with China, not in competition, and remain committed to both its regional allies and multilateralism. 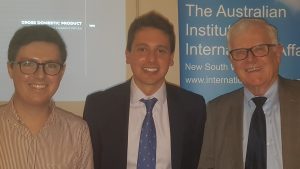