On Tuesday 30th April, Philip Bowring gave a presentation to the Australian Institute of International Affairs NSW at the Glover Cottages in which he discussed his new book “Empire of the Winds: The Global Role of Asia’s Great Archipelago.” Philip is a British journalist who has been based in Asia since 1973. He has written and reported extensively on Asian financial and political issues during a prolific career with the likes of the Financial Times, the International Herald Tribune, the South China Morning Post, the Wall Street Journal and the Far Eastern Economic Review. He is an alumina and Fellow Commoner of Cambridge University.

“Empire of the Winds” is an ambitious project in which Philip has sought to synthesise the culture, language, archaeology, religion and economics of Nusantaria into a cogent piece of historical literature. His motivation for writing “Empire of the Winds” came from his view that the region of Nusantaria has been historically underappreciated and accordingly, is lacking in a prescribed identity. According to Philip, this is at least in part a result of the absence of extensive historical literature relating to the region.

Philip coined the term “Nusantaria” – adapting it from the already-existing modern Indonesian and Malaysian term “Nusantara”, which translates to archipelago – to describe “Maritime Southeast Asia”, the world’s largest archipelago. The book’s fundamental contribution to the historical literature is to present Nusantaria as region with an identifiable singular identity.

His research extends back 15,000 years, when an ice melting event at the end of the last Ice Age created a series of islands that encompass the region referred to in this book as Nusantaria. It is to this juncture that Philip traces the origins of what he argues to be the collective Nusantarian identity, as it coincides with the Austronesian expansion. Although today Nusantaria is fractured by state boundaries, languages and cultures, the region maintains a common original language and culture.

Nusantaria is a region with a vastly underappreciated history of maritime trade. The waters of this region link East Asia to India, Europe, Africa and the Middle East; and thus the region is geographically inclined towards sea trade. Philip affirmed to the audience that prior to the arrival of the Europeans, it was the region of Nusantaria, rather than China, that dominated Asian sea commerce. To convey the enormity of the Nusantarian sea trade, Philip noted that the Portuguese – often regarded as one of the world’s great maritime powers – were in awe of the unmatched size of the ships of Nusantaria, which could exceed 100 metres in length. This above all reflects that the peoples of Nusantaria were masters of their trade.

In sum, “Empire of the Winds” is a remarkable piece of work that provides a new and important narrative about world’s largest archipelago. AIIA NSW was privileged to hear a presentation on a topic and region that is finally receiving the scholarly attention it deserves. 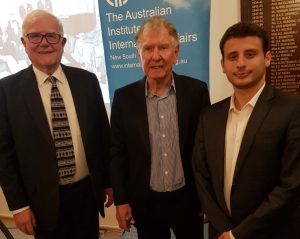