With increasing evidence of the use of social media for interference in the 2016 US election, and the Australian federal election just around the corner, the presentation given by Associate Professor Tiffany Jones on Tuesday 7th April at the Institute was both timely and topical. As concerns mount about our individual and collective vulnerabilities to the tactics of foreign influencers via social media, Professor Jones questioned our preparedness and political will to respond to attempts to sow division in our societies.

As a sociologist at Macquarie University, Professor Jones has researched and published on LGBTQI+ issues in education, social policy, health, legislative change and cyber influence and has liaised with bodies including UNESCO, the UN, and the depression counselling organisation Beyond Blue. Her presentation highlighted the need both to improve awareness of the technical aspects of political interference and to understand the ways in which our own culture and conventions inadvertently facilitate the spread of disinformation.

Technology has broadened the tools available to states and other actors engaging in foreign interference. Social media has revolutionised not only how information is gathered and conveyed, but also how we treat truth. While the hacking of party and parliamentary systems is normally a covert activity, influence operations on social media are often more attention-seeking and public – even if efforts are made to obscure their origins.

Some actions were no doubt mischief making rather than pursuing a political agenda. But Professor Jones cited the interference tactics deployed by key figures like Russia’s Internet Research Agency (IRA), a company based in St Petersburg engaging in online influence operations on behalf of Russian companies and parties and believed to be linked to the Kremlin. Using paid social media advertising, online forums and memes, a wide range of US interest groups were successfully activated by Russian and central European trolls to foment polarisation, distrust and confusion among vulnerable groups.

After analysing over 3,000 memes, Professor Jones suggested four dominant types of interference strategies were used: membership calls, identity celebrations, division provocations and political influence attempts. Professor Jones suggested the groups targeted tend to be those whom society marginalises, those easily segregated and those whose rights are ‘under debate’. The tactics were simple; generate in-group approval and camaraderie and then politicise it when necessary.

As noted in two independent reports commissioned by the US Senate Intelligence Committee, African-Americans, evangelical Christians, pro-gun activists and LGBTI communities were particularly targeted by the IRA through interactions across all social media platforms, although Instagram has become increasingly popular for these endeavours arguably due to its focussing of the image. A political meme on Instagram, for example, can easily tap into people’s emotions by offering false context and inflammatory imagery.

Australia is not immune to this interference, nor the politicised use of social media. Most recently, as Professor Jones noted, Chinese-Australian voters were targeted by scare campaigns over social media platform WeChat which claimed that more than a million refugees could come to Australia over a 10-year period if a Labor government was elected and revived homophobic assertions dating back to the marriage equality vote. This sparked questions in the audience about whether this was a foreign or domestic meddling attempt. Professor Jones acknowledged the probability of cyber interference operations originating in a wide range of countries, not just Russia and China.

During the US Senate Intelligence Committee investigations, social media companies – however reluctantly – disclosed details about the extent of their platforms’ misuse during the 2016 election in the United States. No such admission has occurred in other places like Italy, France or Brazil where social media disinformation has had significant influence over political shifts. As suggested by Professor Jones, it will be necessary to build a coalition of states in order to have significant influence over the transparency measures that need to be implemented by social media giants.

Social media giants have tried to demonstrate they are up to the challenge of preventing their mediums from being used for politically divisive ends by bulking up their security teams and rolling out new transparency features, but implementation remains patchy. Corporate incentives do not necessarily align with the security interests of states and individuals and there is enormous profit to be made by allowing emotionally engaging content, viral sharing mechanisms and self-service advertising platforms to continue.

There are measures that individuals and societies can take to make ourselves less vulnerable to influence campaigns. Professor Jones looked to examples set by Sweden, where critical social media studies have been implemented in schools as a way of increasing fluency with disinformation and media manipulation tactics. Genuine political activism should always be encouraged but measures must be taken, and lines drawn, to prevent trolls being contracted by third parties motivated by the desire to destabilise other countries for their own strategic gains. 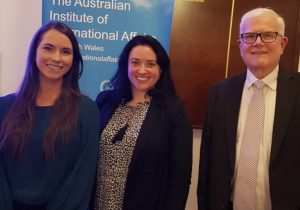