On Tuesday 6th August, AIIA NSW welcomed Sydney solicitor and business man Rodney Lewis to discuss Australia’s fluctuating relationship with East Timor. Rodney explored key stages of the modern relationship from WW2 to the resource disputes which have followed East Timorese independence. He illustrated key events with a personal account from his experience with the International Commission of Jurists during the decades of Timorese struggle.

The first critical interface was the 1941 landing of Australian troops in the then Portuguese-occupied Dili under the rationale of defending the Commonwealth against Japanese aggression. That the Portuguese declared neutrality and refuted this intervention, Rodney argued, involved Australia in an act of “dismal hypocrisy”. Nevertheless, the East Timorese had continued to support Australia’s military efforts. In writing a paper for a previous foreign affairs publication, the speaker was brought to tears – not solely for the Timorese, but for his own country.

A leaflet designed to bolster morale on behalf of Australia during WW2 proclaimed, “Your Friends Do Not Forget You”. Australia had not followed through on these sentiments. The people of East Timor were returned to Portuguese government after WW2 in deference to colonial claims.

Rodney stated that Australia’s position on East Timor and its people was catalysed by the crumbling of the Portuguese empire in 1974. In the same year, Gough Whitlam was recorded in a meeting with Suharto expressing his sympathy to Portuguese Timor becoming a part of Indonesia. It was a dominant thought amongst government officials that the resource-rich seabed could be more readily negotiated with Indonesia than an independent East Timor. This national motive was the background to the Australian government withholding intelligence at the expense of the five journalists – known as the Balibo 5 – who were murdered during Indonesian incursions in October 1975. Two months later Indonesia crossed the border into East Timor, which marked the beginning of a bloody quarter-century occupation that initiated atrocities such as the Santa Cruz Massacre.

Rodney highlighted that it was the people of Australia who fiercely protested the regional conflict and pleaded for government action. In a 1988 letter to the then Indonesian president Habibie, prime minister John Howard proposed that Indonesia allow East Timor to vote on the fate of their nation. Rodney was appalled that DFAT abstained from a UN peacekeeping mission for the one-year interim period when the Indonesian-sponsored militias ran riot leading to terrible and murderous incidents. In 1999, the peacekeeping force INTERFET was finally created under the urges of the UN, and the Indonesians withdrew from the territory.

Boundaries and resources have dictated much of the relationship between East Timor and Australia since this time. A series of negotiations were under way from 2002 to 2006 to deliberate the national boundaries of the Greater Sunrise oil and gas fields. Former spy in the Australian Secret Intelligence Service (ASIS) ‘Witness K’ has since revealed that he was a part of the ASIS led operation that placed listening devices in ministerial and cabinet offices of the government of East Timor during negotiations.

Rodney argued that this betrayal has led East Timor turn to other regional partners. China has been approached many times over recent years to finance the Greater Sunrise fields and East Timor has expressed interest in becoming a member of ASEAN. Rodney concluded that East Timor’s primary focus is developing an industrial aspect to their economy. Rodney hopes this may change the dismaying reality that East Timorese children are the most malnourished in the world.

During Q&A time, Rodney answered queries about Australia’s ethical breaches in the name of resources and stressed that in order to reconcile with East Timor and develop a strong relationship, Australia must be less gung-ho when approaching national interests. 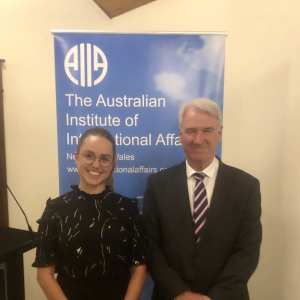