On Tuesday 21 September 2021, the Australian Institute of International Affairs NSW hosted the Australian launch of Debasish Roy Chowdhury and John Keane’s new book, To Kill A Democracy: India’s Passage to Despotism. In his remarks launching the book, AIIA NSW president Ian Lincoln praised its eloquence, extensive research and lively use of case studies. He noted that, while the book had been launched globally three months ago, it remained unavailable in India online or in bookshops, reportedly due to publishers’ fears of Modi government reprisals.

Debasish began his address by noting that, though the book is about the death of a democracy, he wanted to first talk about its life. The concept of democracy has had a very successful life across the globe. Today, on the international scene, democracy is cited as the basis for some significant geo-political alignments. In the case of India, democracy acts as the cornerstone of their alliance with America. It is a foundation theme of the Quadrilateral Security Dialogue (QUAD) and is prominent in the rhetoric of Australia-India bilateral relations. Turning to the decline of India’s democracy, Debasish considered how despots were becoming better at using democratic institutions for their own agendas. Modern democratic decline, as we see with India, is a slow, internal destruction that maintains the appearance of a democracy to outsiders. When India began its draconian lockdown in Kashmir in 2019 and we began to see a rise in hate crimes against Indian Muslims, the international community saw cause for alarm. A Swedish research institute stated that India resembled an “electoral autocracy”, and Washington downgraded India to a “partly free” country. However, Debasish noted that it would be too simplistic to say that the problems with India’s democracy have only emerged recently under Modi: they have been ongoing, rarely covered by international media. Debasish stated that today we are seeing unprecedented institutional capture in India. Indian institutions are no longer autonomous, and self-censorship is rife in the media. Debasish asked, considering the extent of inequality in India, whether India can really consider itself a democracy when democracy itself is predicated on basic notions of equality of treatment in such areas as law enforcement and management of the economy.

After 20 minutes, John took over the address asking, “how do democracies die?” To answer this question, he turned to an older way of thinking: that democracy is a way of life. John said that the book tries to show how the degrading of people’s lives is linked to the degradation of governing institutions. Once despots control the levers of state power, they attempt to neutralise check and balance bodies and engage in gaslighting and spreading rumours. In India, he explained, we have seen countless attacks on journalists and the neutralisation of the judiciary and parliament, with no internal elections within political parties. An interesting point he raised was that these despots defend their actions in the name of the people, attributing blame to “enemies” and marginalised groups – thus excluding them from exercising their democratic rights. John warns that, if unchecked, this seemingly democratic exercise of power could allow the government to use its powers in redefining and dividing the people.

After Debasish and John’s address, questions followed from the audience in relation to both India and the wider international context. Asked how much the Hindu/Muslim tensions have contributed to the current state of decline, Debasish noted that many countries which have experienced cultural and religious differences have, over time, worked to reconcile them. But India’s Bharatiya Janata Party seems committed to reviving memories of India’s painful partition, as the party’s success is dependent on drawing out the religious and cultural differences in the country. In response to questions raising comparisons to British and Australian democracy, John warned that all democracies are vulnerable to demagogues, particularly where there is a growing gap between the working and ruling class and a dislike of the political class. In the UK, democracy is wavering amidst Brexit dynamics and rising concerns of the weakening parliament. Turning to the Australian context, he said we needn’t look further than such issues as Christian Porter’s legal funding – which revealed the pervasiveness of “dark money” – and the use of government funds for electorally-focussed carparks as results of not having an anti-corruption body in the federal government. Another popular point of discussion was whether the continuing decline of Indian democracy would undermine the “shared values” of the QUAD; Debasish responded that the QUAD’s fundamental focus is the wish to contain China, and as long as that concern persists, the QUAD will too. A quote from Debasish that “the soul [of Indian democracy] has left the body” nicely delivered the essence of his and John’s address and, by extension, what is covered in their book. 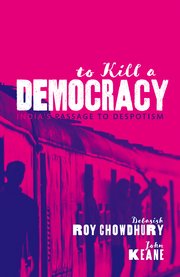 For further information on purchasing a copy, please click here