Up until now, Sweden has maintained a stable political system. Underlying this has been Sweden’s identity as progressive, prosperous and open. However, the 9 September elections rocked this status quo. On Tuesday 20 November, the Institute welcomed Dr Joakim Eidenfalk who shared his insights on the Swedish election and the rise of populist parties in Europe.

Since the election, Sweden has been unable to form a government. While the Social Democrats and Moderates are still the largest parties, their share of votes dropped considerably, and the traditional left and right blocs have fallen short of the necessary majority. This leaves the Sweden Democrats, who became the third largest party and captured 17.5% of votes, as potential kingmakers. However, many minor parties have refused to deal with the Sweden Democrats.

Dr Eidenfalk explained that the Sweden Democrats emerged in the late 1980s as a fringe group with neo-Nazi roots. In 1998 they made noise but wielded no power, capturing only 0.02% of the vote. Jimmie Åkesson’s 2005 election as the party’s leader saw the Sweden Democrats attempt to transform themselves from a fringe party to “acceptable.” Åkesson appeared more polished, appealed to a broader audience and initiated a campaign of “zero tolerance against racism” (though some Sweden Democrats continue make offensive and controversial comments). This translated to gradually improving electoral success; they entered parliament for the first time in 2010 and captured 13% of the vote in 2014.

Today, the Sweden Democrats’ ideology touts conservative values, ethno-nationalism and anti-immigration. Sweden has accepted the most asylum seekers per capita in Europe. While public opinion surveys have found that most Swedes tend to support immigration, the sudden influx of over 162,000 asylum seekers in 2015 (as part of Europe’s response to an influx of Syrian refugees into Turkey) was a major shock. There are demographic gaps: older generations, those without higher education and those who do not live near immigrants tend to be more concerned about migration. The Sweden Democrats play on fears of cultural change and rely more on perceptions of crisis than actual facts. For example, they claim that crime has significantly increased, when statistics show that it remains steady.

Placing Sweden in the broader European context, Dr Eidenfalk noted similarities and differences with other populist movements. In Norway, they played on anti-EU sentiment; in Denmark they focussed on taxation levels. Populists have capitalised on and fed into feelings of disillusionment with government and media. Concerns around job security, stagnating wages, terrorism and immigration are used by populist parties to create a sense of crisis and a narrative of “the people vs the elite.” Sweden is relatively late to the game and its far-right party has not been as successful as others, like Orbán’s Fidesz party in Hungary.

Dr Eidenfalk predicted that, so long as fears around immigration, crime and national identity remain, the Sweden Democrats will be here to stay. The current stalemate could result in the two main blocs breaking up, which would be a seismic shift in Sweden’s post-war political landscape. 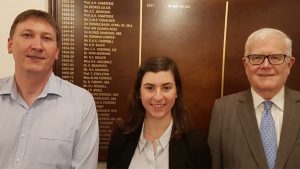 In response to questions, Dr Eidenfalk explained how the traditional parties will have to compromise some of their policies – probably by taking a harder line on refugees and immigration – to attract support away from the Sweden Democrats and regain power. The previous government had already reacted, for instance putting up borders with Denmark in response to Swedish concerns about groups such as Romanian job-seekers entering under the Schengen arrangements.

Overall, it appears that much of European populist parties’ recent success relies on identifying legitimate concerns but then offering explanations and solutions which play on fear rather than fact. What sort of Sweden and Europe will emerge from this remains to be seen.