The Covid-19 pandemic continues to set the agenda of Australian and international politics, as it transforms lives in our communities and threatens the lives of Australian citizens here and abroad. On Tuesday 11 May, Adjunct Professor Bill Bowtell AO addressed the Institute on the missteps that have shaped the national and international pandemic response and outlined constructive steps toward better managing both vaccine distribution and future pandemics.

Bowtell drew on his experience as senior advisor to the Australian health minister during the HIV crisis from 1983-1987, his subsequent work focused on malaria, cholera and HIV with the Pacific Friends of the Global Fund, and, over the past year, his contributions to public policy formation in responding to Covid.

The HIV pandemic demonstrated Australia’s capacity to legislate an effective response to a rampant, deadly infection without a readily available vaccine or treatment – a striking resemblance to Covid. Premised on a bipartisan commitment to put the issue above politics, Australia’s response to AIDS was successful and internationally unique. The crux of this response was coordination between different levels of government to facilitate behavioural change, cross-party cooperation, and frank communication between the government, health professionals and the community. Looking back on this response and subsequent viruses such as SARS1, swine flu and Ebola that the international community responded to effectively, it seems shocking that the international community was so slow to respond to the emergence of Covid-19.

Bowtell attributed this initially lethargic international response to the politicisation of the virus, spearheaded by America’s political leadership. Dismissive rhetoric around the virus (reminiscent of President Reagan’s disregard of HIV prevention), promoting “herd immunity” and privileging economic interests saw many countries squander the opportunity to respond rapidly. While Australia’s response is now celebrated as successful, Bowtell emphasised the initiative of state leaders: the missteps of the federal government were only corrected by the initiative of state leaders to reject the national line and institute lockdowns, and by the example provided by the Ardern government in New Zealand. Britain, the US and Europe have been ineffective in dealing with Covid; the more successful countries have been in our region, including Vietnam, Taiwan and Singapore.

We’re far from the end of this pandemic. In contrast to AIDS, international work on Covid vaccines gained pace rapidly from mid 2020; but so far the Australian government has manifestly failed to facilitate vaccine distribution en masse. The number of cases internationally continues to grow exponentially and the potential for the virus to mutate new variants is ever-present. While Australia is faring comparatively well, no country can deal with Covid in isolation: “until we’re all out of it, none of us are”. To improve the international response to Covid and subsequent pandemics, the “anti-science brigade” must be confronted and the capabilities of the WHO need to be enhanced. While the Australian government has admirably supported international COVAX initiatives, Bowtell recommends more substantial investment to better protect less advantaged countries, remarking that “the greatest vaccine of all is money”.

Responding to audience questions about re-opening international borders, Bowtell advocated for “vaccines first and borders second”. Criticising the self-interest of business advisory groups and Australia’s “rickety” quarantine facilities, Bowtell identified purpose-built quarantine facilities and large-scale vaccination as crucial preconditions for re-opened borders. Asked about European states’ pandemic response, Bowtell commented that the ‘yoyo effect’, triggered by the overzealous loosening of restrictions, had prevented elimination. On ethical vaccine distribution, he predicted that the tension between equity and vaccine nationalism will be central to international political discourse for the next year.

For Bowtell, nature creates viruses, but politics creates pandemics. Viruses are an inescapable reality of life on earth, embodying the iron laws of physics, chemistry, biology and mathematics. Tremendously creative national and international policymaking is required to limit harm and build back better. 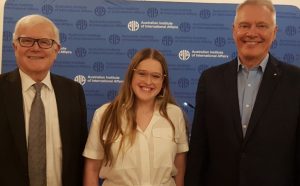