On Tuesday 24 August 2021, the Australian Institute of International Affairs NSW was addressed by HE Mr Graham Fletcher, the Australian Ambassador to China. His focus was on China’s situation in 2021 and recent tensions in our bilateral relationship.

Ambassador Fletcher opened by focusing on the COVID-19 pandemic, which has dominated the conversation in China since early last year. Ironically, the virus has now come to be seen as a foreign problem that China needs to protect itself from. Covid management has been a source of great pride in China. There have been comparisons to other places that have not been as successful, to show that the Chinese government system can deal with these things better. But China’s vaccines don’t seem to be as effective against the new, highly-infectious variants.

This year’s centenary of the Communist Party’s founding has been projected as a benchmark for major goals: achieving “moderate prosperity”, eliminating absolute poverty, doubling the size of the economy. Propaganda has been working overtime to communicate these successes, with a genuine pride in what China has achieved in the 100 years of the Party’s existence. For many Chinese citizens it is “so far, so good”. There is a sense of confidence, even triumphalism, and a real affinity with the saying “the East is rising; the West is declining”.

The Ambassador noted that the Chinese media plays up issues in the West, such as COVID-19, the Trump administration and Afghanistan, to highlight this supposed decline. From the top down, China is portrayed as being on the path to success but needing to continue to be disciplined. Party discipline and loyalty have been reinforced, and there is little room for dissenting voices. The media is heavily managed with all reporting of international events coming through the official news agencies – there are no direct takes from overseas or independent sources on what is going on in the wider world. The Ambassador’s impression from being in China on and off for the last 35 years is that the political atmosphere is more restrictive than before, backed up with new technologies.

On economic matters, he commented that China has experienced one of the strongest recoveries from COVID-19. However, there are large wealth disparities, especially between rural and urban dwellers. Rural incomes are roughly one-third of those in cities, regardless of which province you look at. While the country has had success in tackling absolute poverty, around 40 per cent of the population are living on less than AU$50 a week. Overall the growth outlook looks solid.

On the Australia-China relationship, Ambassador Fletcher acknowledged the current strains. China is pursuing actions to reduce Australian imports. The disruption has affected several Australian industries – coal, timber, meat and seafood in particular. Australia and China have not had ministerial meetings or phone calls since early last year. As a result, the embassies have conducted the brunt of the dialogue between the countries.

Broadly speaking, China has become more assertive towards Australia than towards other countries. Australia wants a region where every country has space to make their own choices without asking for permission, and we want to develop a relationship with China based on shared interests. The Ambassador does not envision a quick or easy fix. For the time being, Australia needs to stay calm, patient, and determined, and remind our Chinese counterparts of what we have achieved and what is still possible.

The Ambassador queried whether China would achieve its dreams. His answer was that it is hard to say, but likely a combination of yes and no. Yes, it will become the largest economy; but he is not certain it will become the leading power. This is because the path to China’s dreams will become increasingly harder. You need more than just technology: institutions and social frameworks are trickier to develop.

In response to questions from the audience, the Ambassador explored China’s current international posture and, in that context, our bilateral relations. He foresaw no great change on US policy under the Biden administration. China was strengthening relations elsewhere, for example with Russia and Pakistan.

Asked what Australia could do to encourage China back to high-level dialogue, he said that China was demanding things from Australia that were impossible to deliver, particularly in the 14 points of contention China gave to the Australian media last year. Moreover, the absence of high-level dialogue did not mean that we were not talking. A lot of communication between China and Australia is through embassies.

But the problem is that we are not engaging in the comprehensive way we want. In the Ambassador’s view, there will be an extended wait till we see an improvement in the bilateral relationship. In short, the Ambassador concluded, he did not have a dull day job. 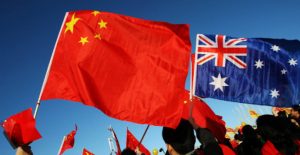