On Tuesday 10th May, Dr Naoise McDonagh spoke to the Australian Institute of International Affairs (AIIA) NSW. Dr McDonagh is the current President of AIIA South Australia. He is an academic at the University of Adelaide, with expertise in international political economy. This address provided a geo-economic lens to perceive the EU-China relationship. By analysing the current geopolitical context, systemic rivalry in an economic sense and divergent political and social values, Dr McDonagh contended that future EU-China economic relations would involve continuing tensions and selective opportunities.

At the outset of the address, Dr McDonagh divided the trajectory of the EU-China relationship into two parts: the period of re-engagement (from the 1990s to 2017) which gradually morphed into systemic rivalry from the mid-2010s. Dr McDonagh applied a case study of Foreign Direct Investment (FDI) to identify potential threats the EU might face in its collaboration with China. He emphasised China’s attempts to weaponise economics to achieve its non-economic objectives. This trend had been evidenced in the previous Senkaku Islands dispute with Japan and the tension with South Korea over the installation of the US high-altitude defence system, THAAD.

Dr McDonagh expressed concern that China might leverage economic tools to intervene in EU politics. He also mentioned potential risks of unfair subsidies, espionage and technology theft that may cause vulnerabilities in the EU-China relationship.

The EU had developed EU-wide FDI screening mechanism in response to these risks. Dr McDonagh suggested that this regulatory response fits the purpose of protecting against state-driven investment that might affect security and public order. In this connection, Dr McDonagh listed four major concerns arising from China’s unique socialist market economy. The first is an inextricable party-state relationship that makes the CCP’s power unconstrained. This links to the second problem, that China is still in a mode of ‘rule by law’ in which the law is a merely a formalistic tool to serve political power, without an independent judiciary. The third concern is that in China the ruling party acts as a state-level investor owning 91% of central and local entities, whereas the private sector accounts for only 9%. The last concern is China’s increasing international assertiveness under Xi’s administration.

Dr McDonagh fielded several multifaceted questions around three main topics: prospects for the EU-China partnership; the impact of the Ukraine crisis; and whether a binary perception to conceptualise and polarise China and the West is normatively and realistically applicable.

He agreed that there are positive opportunities in the EU-China economic partnership. But the future is likely to feature a selective decoupling. Though China plays an essential role in supplying rare earth and solar panels, he noted that the EU itself has well-developed supply chains and can pivot to the US for diversity and back up.

When queried about the impacts brought by the Ukraine crisis, Dr McDonagh observed that, on the one hand, the European countries are dismayed about China’s implicit support towards Russia; hence they may decrease collaboration with China. On the other hand, Russia has no choice but to orient toward China over the long term, especially in energy sectors.

He acknowledged that, over history, China is not the only power to have adopted mixed economic systems and economic strategies to defend political aims: plenty of similar trends can be found in European countries, the US, Japan and so forth.

As to whether over-politicalising China’s economic conduct will result in a binary image of the world which departs from objectivity and truth, Dr McDonagh suggested that this is a quantitative shift: a hyperconnected trend in using economic means for non-economic gains makes China’s geo-economic strategy particularly salient.

He commented that the economy now constitutes the basis of states’ political power in general; hence it is important to analyse the distinctiveness of China’s state capitalism. He agreed that it is difficult to foresee the future – what social scientists can do is identify trends and make possible plans for responding. 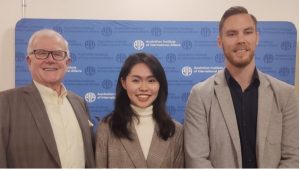