On Monday 11th March, Professor Richard Whitman, Director of the Global Europe Centre and Professor of Politics and International Relations at the University of Kent, addressed AIIA NSW on the topic of Brexit and the state of UK politics.

Professor Whitman believes Brexit has become the “defining condition of British politics”. He explained that since the 1990s a ‘civil war’ within the conservative party over the UK’s membership of the European Union (EU) had caused successive leaders to struggle with ways to unite their party. This culminated in David Cameron’s decision to call a referendum on EU membership in 2016.

On the British negotiations with the EU, Professor Whitman commented that there had been minimal preparations made for a leave vote. While the British Civil Service has been reorganised with two new departments created for implementing Brexit after the referendum result, Professor Whitman analogised the situation to building the hardware of a computer without having the software to run it. While the infrastructure was in place to try and navigate Brexit, it has been impossible to execute a seamless divorce without a clear plan of what the UK wanted in an exit deal.

Professor Whitman further noted the UK has been forced to compromise on almost all the ‘red lines’ that Prime Minister Theresa May had announced prior to negotiations. While the perception in the UK was that the 27 remaining states of the EU would be divided in the negotiations, the reality is that they have remained remarkably united. Professor Whitman put this down to the structure of EU negotiations, where EU countries give a mandate to the EU council, who then give a mandate to their negotiators, ensuring that the process has a very clear trajectory. Additionally, he argued the UK had made many errors in the negotiations and burnt its goodwill with the EU, resulting in many European countries no longer being sympathetic to the UK’s aims.

Turning to the short-term ramifications for UK politics, Professor Whitman expressed the view that Brexit will likely happen. However, the fundamental problem for the UK is that pro-Brexit MPs have been focused on setting up boundaries for the UK’s future relationship with the EU, rather than agreeing on a civil exit arrangement. While there is no majority support for Theresa May’s Brexit deal, there is also not enough support for a no-deal exit or a second referendum to make those options likely. Professor Whitman suggested that Britain may need to have an election in order to break the impasse in Westminster.

On the long-term ramifications of Brexit, Professor Whitman emphasised how uncertain the future impacts of Brexit are. He said that Brexit was a “textbook case of how not to run a Westminster system” so was not convinced that Brexit showed an endemic weakness in the UK’s system of government. However, voters’ positions on Brexit (“leaver” or “remainer”) have become their defining identities. It is not clear whether people will default back to normal party allegiances after Brexit, or whether Brexit signals a fundamental realignment of British politics. He argued the UK’s first past the post electoral system made it harder for new parties to form, even if voters were prepared to jump ship from their old parties.

Internationally the UK now has to chart a more independent path. This could involve acting more unilaterally like the United States, but Professor Whitlam also noted the UK could eventually find itself coming back to the EU. However, their reentry would be on different terms to how they left, for example they would have to join the Euro and would have no special consideration on migration policies. Professor Whitman ended the talk by reminding the audience that, regardless of what form Brexit takes, the UK will always need to work with the EU. 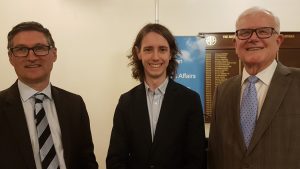