Unlike previous works he noted that his outline of international law covers newer key areas, including international criminal law, laws for combatting terrorism, shipping, aviation, and outer space law, the U.N. specialised agencies, and environmental law. Given their day-to-day application, Dr De Stoop underscored the need for a rigorous study of these areas. For example, civil aviation law and international shipping laws must be adequately explained given their importance and relevance to contemporary commerce and basic national security.

Similarly, Dr De Stoop noted that international law surrounding the environment is still in its nascency, with topics such as air pollution and climate change only beginning to take on a more legal character. The most important legal development is the Paris Agreement, which has strengthened the global response to climate change and promoted international environmental cooperation. While the Agreement has been signed by 185 countries representing over 88% of global greenhouse gas emissions, the political will to fully implement the Agreement is far from assured.

Dr De Stoop argued that international trade laws enjoy a mixed degree of observability, and that international shipping and civil aviation laws occupy the most observed end of the spectrum. In the area of international security, chemical and biological weapon conventions enjoy strong participation. However, the laws pertaining to international and non-international armed conflicts are not well observed. These mixed results stem from the primacy of state interests in moments of political survival, along with the fundamental tensions between developing and developed countries.

In addition to global treaties, there are a range of regional and bilateral treaties, including the European Convention on Human Rights, the African Charter on Peoples and Human Rights, and the ASEAN Convention on Counterterrorism. Dr De Stoop argued that these regional treaties tend to be better observed than those at the global level. Moreover, due to the maximum flexibility offered in negotiations, there are numerous amounts of bilateral treaties in operation, especially in the area of international trade.

Taking on an assessment of the current state of international law at the global level, Dr De Stoop noted that the major world powers have all undermined the international legal system, albeit to varying degrees. President Trump’s aversion to international courts, support for the Saudi-led bombing campaign in Yemen, and withdrawal from various international agreements represents an affront on international law. Likewise, the dominant view of the Chinese government is that domestic law is supreme and will always trump concerns of international law when they intersect. As for Russia, its military interventions in Crimea and Ukraine violate basic sovereignty.

When asked about U.S. economic sanctions against the Iranian regime, Dr De Stoop responded that they were indeed illegal under general international law. Further, Dr De Stoop conceded that a state, when confronted with a diametric choice, will always choose its basic national interest over the interests of international law; however, he argued that the same situation applies in domestic law where citizens, if motivated enough, will flout state laws. Finally, when asked to locate gaps in international law, Dr De Stoop highlighted the lack of a strong application in non-international armed conflict and the near non-existence of international law in the areas of biotechnology and artificial intelligence. 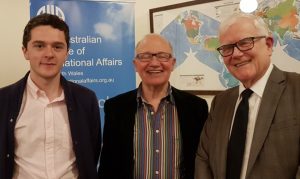