But, along with the benefits from transnational collaborations, Dr McLennan discussed the threats presented by foreign interference, including to intellectual property, research integrity and national security. Against the backdrop of an increasingly interconnected and changing global economy, international research collaboration has brought the need for regulation and coordination between universities and government. In a changing world order, China now accounts for roughly the same share of global science and technology as the United States, including key areas such as space, artificial intelligence, energy and communications. It is becoming Australia’s largest partner in global research and development.

New legislative developments in the area are focused on the recently-enacted Australia’s Foreign Relations (State and Territory Arrangements) Act 2020 (Cth). The Act governs arrangements between State/Territory entities (including public universities) and foreign entities. Such laws are set to have a significant effect on universities, with an estimated 10-15 thousand arrangements requiring review. Approximately 90% of research in Australia is conducted by universities. The Act is well-intentioned but somewhat unclear and broad in scope. There is a risk that the new stringent requirements will deter industry from collaborating with universities and impose a high compliance burden on universities, discouraging worthwhile projects and potentially detracting from Australia’s research and development capacities and from the international standing of our universities.  Similarly, there are problems with including universities in the proposed Commonwealth Integrity Commission and the coverage of the Security Legislation Amendment (Critical Infrastructure) Bill 2020.

The executive powers conferred by the new laws will empower the responsible Minister to declare invalid foreign arrangements that are deemed to undermine Australia’s security or foreign policy (to be administered within the Department of Foreign Affairs and Trade). However, according to Dr McLennan, universities are aware of their obligations under the new legislation and are being proactive, taking responsible actions, including due diligence. This has been facilitated by the Guidelines to Counter Foreign Interference in the Australian University Sector released by the Federal Government in 2019, in addition to collaboration between universities and security agencies, the latter providing expertise on the “scale and scope” of threats.

In response to questions, Dr McLennan expanded on the way the Australian Parliament has defined foreign interference; how legislative changes can be made research-friendly; the commercialisation of research; and the impact of the government’s approach on the soft and hard sciences. In response to a question on whether dubious intent on the part of foreign entities has been ascertainable, Dr McLennan noted that a scarcity of examples within the university sector is not evidence that such threats do not exist. Nevertheless, he assessed that international research programs and international partnerships are preponderantly legitimate and reputable.

Dr McLennan emphasised that a balance must be drawn between the competing concerns of collaboration and security. Universities are engaged in lively and comprehensive negotiation with government, including via the Parliamentary Committee on Intelligence and Security. Australian academic institutions must be protected from foreign interference in a way that still preserves the value of openness which is a cornerstone of academia. Furthermore, international collaboration should not be deterred: it is essential for research, innovation and global engagement. 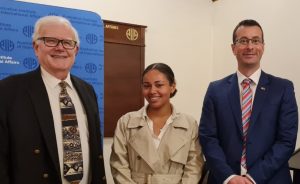