On Tuesday 5 March, Graeme Dobell FAIIA of the Australian Strategic Policy Institute presented his forthcoming research on Australia’s Pacific “pivot”.  Australia’s 2017 Foreign Policy White Paper declared that the stability and economic prosperity of the arc of countries from Timor Leste though Papua New Guinea to the Pacific island countries is of fundamental importance to Australia. The security of the South Pacific has been identified as a strategic imperative for Australia’s defence for decades, and China’s growing presence in that region – including a determination to counteract Taiwan’s standing – has prompted a renewed surge of interest from Canberra in maintaining Australia’s preeminent position as the preferred partner of Pacific states. Australia’s pivot to the Pacific, though motivated primarily by strategic denial, brings with it a stronger commitment to that region’s broader security and economic integration with Australia.

However, what has been lacking from Australia’s Pacific policy, Mr Dobell contends, is a focus on people-to-people links. Despite Australia’s history as a colonial power in Papua New Guinea and long-standing links in the South Pacific, Melanesian culture and people are under-represented in Australia’s multicultural society. To generate buy-in from Pacific leaders on a deeper level, a commitment to a Pacific community is required. Australia’s Seasonal Worker Program is a positive example of the human ties between Australia and our Pacific neighbours. The new language of “Pacific family” expounded in Prime Minister Scott Morrison’s recent visits to the Pacific strikes the right note. It represents an important shift in the way Australia conceptualises its relationship with the region. Morrison is the first Australian Prime Minister to have made bilateral visits to Vanuatu and Fiji, and his reception indicates that Pacific states are positively disposed to attempts to build closer “family” ties.

Working towards a more well-rounded relationship with South Pacific states is not without its challenges. These include the expectation that Australia will make meaningful progress on meeting its obligations under the Paris Agreement: the Pacific Islands Forum’s 2018 Boe Declaration, though focused on security, stated at its outset that climate change is the greatest threat facing the Pacific. And it will take us a long time to live down the reputational damage Australia has suffered as a result of the role Nauru was strong-armed into playing in our off-shore processing regime; the “Pacific solution” is our biggest image problem in the region.

Ultimately, Chinese overtures to the Pacific are motivating Australia to do what it should be doing already. It is not only in Australia’s military-strategic interest to be regarded as a regional leader; the backing of the Pacific nations also multiplies Australia’s voice in international forums. For Mr Dobell, Australia’s engagement with the South Pacific is fundamental to our long-term interests, influence and values. 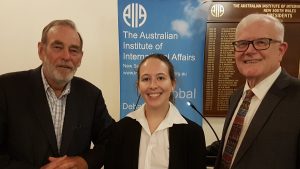