On August 21, educator, researcher and policy-maker John West gave an interesting address to the Institute about the contents of his latest book, Asian Century … On a Knife’s Edge. In his talk, he suggested that the hype surrounding the ‘Asian century’ is largely overstated, and explored the challenges for the realisation of the Asian century.

According to West, there are several reasons why an ‘Asian century’ is unlikely. The first is Asia’s stunted economic development. Other than Hong Kong and Singapore, most Asian countries – including Japan, despite expectations – have not caught up to Western countries like the US in terms of GDP per capita and technological sophistication.

Asia’s emerging ‘middle class’ has also been greatly exaggerated. With most people still earning very low wages, only around 15 percent of Asia’s population can actually be classified as ‘middle class’ based on current wages of the population.

He considered that Asia’s emerging superpowers, such as China and India, are fragile and the problems with their domestic politics mean that continued rapid growth is not sustainable. The economic power of many of emerging superpowers in Asia had only come from their huge populations, which are now ageing and hence less productive. Combined with the increased unpredictability of the US, which has been instrumental to the development of Asia, there is now less certainty for the ‘Asian century’. 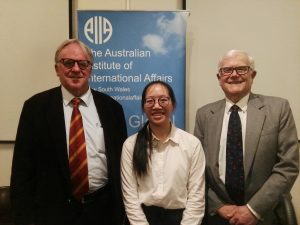 In his book, West outlined seven challenges that will prevent the realisation of the Asian century. For this presentation, he focused specifically on the issues of global value chains, and peace and security.

The greatest challenge to the fulfilling of the Asian century, however, is the problem of peace and security in the region. West noted that there is still real risk of conflict in Asia, whether it be regional conflict or internal social crises. Unless there is more unity within the Asian region and more reform of their political systems, the concept of the ‘Asian century’ will still have a long way to go before it can surpass the Western countries.

In response to questions West claimed that China’s technology is copied from others. While both India and China are still too low in the global value chain, he suggested that in spite of its messy domestic problems, India has the potential to surpass China in the future due to the relative long-term stability of its democratic system.