Mr Finaud’s presentation centred on why it is important to sign the 2017 Treaty on the Prohibition of Nuclear Weapons, and on new forms of conflict and challenges to arms control in the Middle East. 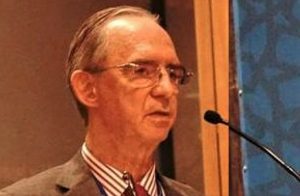 Mr Finaud emphasised the urgency of the prohibition treaty gaining more signatories because the risks arising from nuclear arms are increasing. Arguments in favour of nuclear weapons – for example the claim that the nuclear attacks on Japan in 1945 hastened its surrender and that the cold war nuclear stand-off has secured peace since World War II –  do not stand up to scrutiny. The non-proliferation treaty is being eroded by the behaviour of nuclear weapons possessing states. The step-by-step negotiations between the US and Russia towards further reduction of strategic nuclear weapons have stalled. The comprehensive nuclear test ban treaty has still not entered into force due to the lack of ratification by most nuclear weapons states. The risk of nuclear war, whether intentional, accidental or terrorist, is as substantial as ever. Nuclear weapon states need to adopt agreed policies to stem proliferation and reduce stockpiles. Useful steps would include agreement on separating warheads from means of delivery and new negotiations among nuclear weapons states toward a policy of non first use.

On the Middle East, Mr Finaud commented that numerous interstate wars apart from the Arab-Israeli conflict have occurred in the region since World War II. Israel’s threat perceptions arising from its hostile Arab neighbours and their superiority in population have led it to develop nuclear weapons and substantial conventional arms superiority. There are growing humanitarian risks arising from the increased use of explosive devices in civilian populated areas. At a time when armament levels are rising in the region, it is important for external states exporting arms to the Middle East to ensure that their use is not in conflict with international conventions on the use of arms.

Round table discussion focused on the extreme and urgent nature of improved nuclear arms control and on the value of the 2017 treaty on the prohibition of nuclear weapons. The prospect of nuclear warfare is as large and intractable a problem as climate change, and could be argued to be more urgent.