The act of applying historical reasoning to policymaking poses several dilemmas. The first is whether the history invoked is the genuine source of the policy or is designed to vindicate policies which are adopted for other reasons. The second stems from how a single event can produce several competing historical visions which offer varying lessons.

Professor Logevall discussed the roles of analogies in historical models, in particular their utility and limitations for policymaking purposes. An over-reliance and misuse of analogies can result in fatalism, whereby the logic of a historical analogy can appear inescapable. In these cases, leaders tend to seize hold of a single analogy and do not search widely or test its applicability.

A paradigm of this is the Munich 1938 analogy, which has shadowed the political calculus of American policymakers since WWII and dirtied the notion of “appeasement” into a symbol of naivety and weakness. Policymakers often stretch the applicability of Munich to such an extent that all acts of potential compromise with adversaries become perceived as another “Munich” redux; thus, reducing diplomacy and negotiation to another lesser form of appeasement.

However, Professor Logevall challenged this stereotype by noting that, at the time, Roosevelt was actually relieved by its signing, Hitler was infuriated by the agreement, and Chamberlain was tactically victorious in securing breathing space. Demonstrably, no historical analogy should be judged outside its original circumstances.

Professor Logevall then examined President John F. Kennedy’s historical sensibility during the 1962 Cuban Missile Crisis. Kennedy expressed his fear that lesson-makers would conclude from the crisis that future problems with the Soviets could be solved through a similar display of toughness and muscularity. Yet Kennedy understood the problem of constructing generalizations from particular events. This crisis was highly particularistic and specific because the US enjoyed local conventional superiority, Soviet national security was not directly engaged, and the Soviets lacked a case that they could make convincingly to the international community. The outcomes enjoyed would unlikely be replicated absent of those conditions.

In the case of Vietnam, it was now becoming increasingly clear that presidents Kennedy and Johnson and Defence Secretary McNamara had all had serious misgivings about the war from the outset. But the Munich analogy had led them to take hard-line positions and not pursue opportunities for negotiating with the North Vietnamese government.

Analogizing across time and space is a fraught act. Both Munich 1938 and Cuba 1962 occurred in a unique temporal and spatial zone, and thus cannot be easily transplanted into different periods. Nevertheless, Professor Logevall described how a wise leader can still fruitfully generalize from history. They must seek alternative analogies and parallels. Instead of purely projecting a trend onto present realities, they should investigate the forces that produced it and ask whether those forces persist in the present case.

Professor Logevall concluded on two points. The first was that American presidents who have broken free from the constraints of the Munich analogy have achieved foreign policy successes. Presidents who have pursued the nation’s interests through diplomacy and resisted charges of appeasement have produced some of the most important foreign policy master strokes, typified by Clinton at Dayton, Reagan’s negotiations with Gorbachev, and Obama’s Iran deal.

The second was that when applying history to policy, one needs to consider the type of historical knowledge being applied. A superficial application of cursory knowledge will only draw out simplistic lessons. Contrastingly, an application of deep knowledge will serve as an antidote to the misuse of the past by leaders and from victimization by analogies. When policymakers escape short-run perspectives and understand better the origins of the present, the creation of a more intelligent future is likely.

In response to questions, Professor Logevall urged historians to continue to penetrate myths and ensure that historical inquiry is guided by the path that the evidence sets. When asked about the state of historical teaching in the U.S. education system, Professor Logevall spotlighted the alarming influence that an absence of historical teaching in high school is having on political discourse in the body and elite politics. A potential remedy could renew a focus on national history and work to foster the ability to reason from evidence at the high school level. When asked about how to overcome the gridlock of historical visions in Australia’s and America’s “history wars”, Professor Logevall stressed that history needs to be taught from both below–in the form of social movements and identity politics– as well as from above through studies of high politics and elite power. 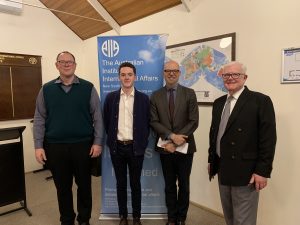