On Tuesday 19 November the current AIIA NSW interns gave presentations on topics of their choosing, followed by questions from the audience.

Ludmilla Nunell addressed the growing China-Argentina relationship, noting that integrating science and technology into its diplomatic strategy is enabling China to present countries like Argentina with a new facet of the advantages of closer relations. This had proved attractive and could bring the two countries closer together. China, as a global leader in many scientific and economic fields, was an important source of technology. The China relationship offered prospects both for increased Argentinian exports and for Chinese investment in Argentina, contributing to raising Argentina’s living standards. A possible Chinese space station in Argentina was being considered. Some of Argentina’s neighbours had misgivings about the strategic dimension of this closer relationship, but it was not a real threat to US regional hegemony.

Abbey Dorian analysed the politicisation in Australia of nuclear power. Nuclear generation had the capability of providing a viable low-carbon energy source for Australia. But debate on this topic had been distorted at the political level by exaggerated assessments of the risk of nuclear accidents. The history of nuclear energy in a wide range of countries, notably France and other major European countries and Japan, showed that advanced economies’ energy needs could be not met without nuclear power generation. Times had changed since the small number of nuclear accidents had hit the headlines. Alternative sources such as wind and solar had not yet reached the level necessary to meet Australia’s needs. Green/Left opposition to nuclear power generation had conflated that issue with the risk of nuclear weapons proliferation.

Alice Guirguis asked why Australia should care about the Middle East. It was necessary to place the region’s history in context and acknowledge that events in that part of the world, despite its distance and the lack of substantive economic ties with Australia, could have far-reaching implications for Australia. Australian communities of Middle Eastern origin, and domestic lobbies with a Middle East focus, were an inescapable element in Australian policy formation. Conflict in the Middle East had resulted in a terrorist threat which was world wide, and had significant impacts in Australia. The capacity to keep such threats under constant surveillance – and to contribute to maintaining and improving stability in the region, making terrorist activity less likely – remained a central national interest for Australia.

Jasmine Brinsmead examined the motivations behind the sustainable development movement. It owed its origins to promotion by wealthy business and other elite interests in Western countries, who were pursuing business motives; welfare in poorer countries was at best a secondary consideration. Their thinking on population sustainability was based on outdated 18th century Malthusian theories. Many sustainable development institutions facilitated transferrals of land for the purpose of bolstering financial output in foreign nation states. The trans-Atlantic monetary system centred in Wall Street and the City of London was the major beneficiary. In order to direct the concept of sustainable development to true humanitarian and ecological outcomes, civil society must be rigorously engaged through genuine collaboration with local landholders.

James Dunn discussed the continuing tight security arrangements at airports in Australia and internationally. There had been little analysis of whether they remained necessary. They were personally intrusive and were not governed by clear rules, particularly about individual rights. They caused stress and delays to travellers. There was a prospect that such security surveillance and intrusion could extend to locations like train stations and shopping centres. The cost of these procedures was considerable, and public and private employment was tied up in them, with substantial profits for private operators. But any prospect of a hard look at these procedures was countered by widespread public acceptance of them at airports due to the sense of security they provided to travellers – whether or not this was soundly based.

Toby Warden described the history of civil-military integration (CMI) in China. From 1949, military technology initiatives were firmly embedded into government priorities under Chairman Mao. Post-Mao, resources from the military had been spread into substantial civilian development projects. Xi Jinping’s rise to General Secretary of the Chinese Communist Party was a critical juncture point for civil-military integration. There was now a substantial fusion between military and civilian developmental organisations. This convergence had become a core part of China’s growing economic and strategic significance. As China rises to become a technology superpower, a broader understanding of the history of CMI in China could provide policy insights for the world’s most important relationship – that between China and the United States. 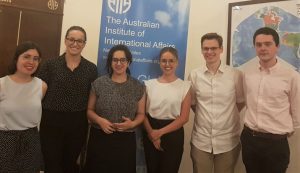