The 2019 Charteris Oration and Dinner

Our 2019 annual dinner and Charteris Oration will be held on Wednesday 27 November. This function marks the anniversary of the founding of the AIIA in 1924 by the professor of jurisprudence and international law at Sydney University, A.H. Charteris.

We are honoured and delighted that our patron, Her Excellency the Honourable Margaret Beazley AO QC, Governor of New South Wales, will be giving the Oration this year. 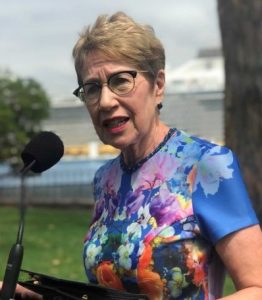 Prior to her appointment as Governor, Her Excellency enjoyed a long and distinguished law career spanning 43 years. In 1993 she was made a judge of the Federal Court of Australia, the first woman to sit exclusively in that court. In 1996, she became the first woman appointed to the New South Wales Court of Appeal.  She was made an Officer in the Order of Australia in 2006 for service to the judiciary and the law.

The venue will again be the Stateroom at the Hilton Hotel in Sydney. We have been able to keep the ticket price the same as last year.

Following are our other events for the remainder of the year:
17 September  Knowledge, Innovation and the New Cold War, Professor Michael Wesley, Australian          National University

1 October         Interns’ debate: Should Australia sign the Treaty on the Prohibition of Nuclear Weapons?

22 October       Brexit: over the precipice, Australia-UK Chamber of Commerce [was 29 October]

19 November    Interns’ presentations on international issues of their choice