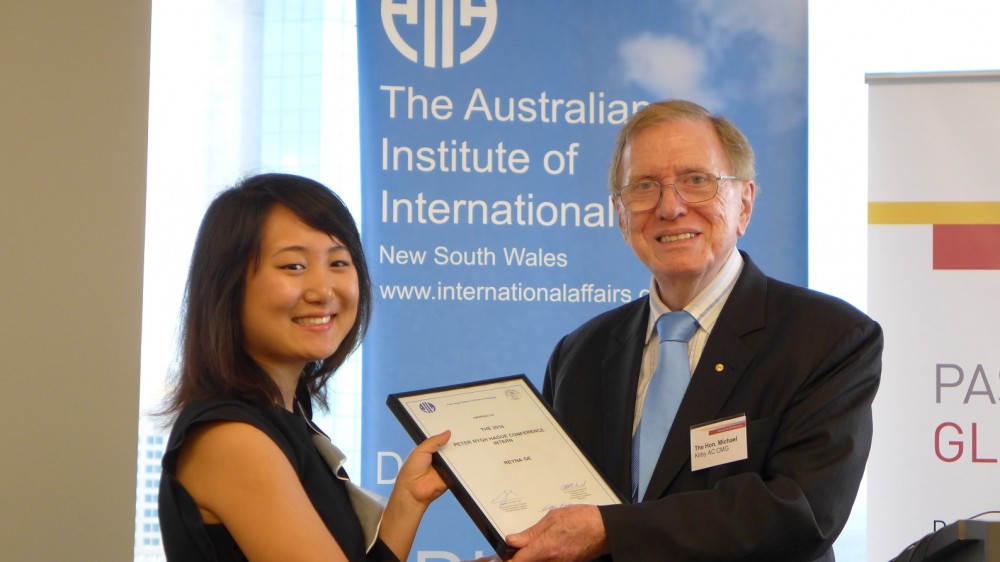 She went on to come first in International Commercial Arbitration at the UNSW Law School in 2014, and was the recipient of the 2014 Danielle Sirmai Memorial Award for private international law. Reyna graduated from UNSW in 2015 with a combined commerce and law degree.

Reyna has practical legal experience having worked for two years as a paralegal at Whittens & McKeough, a boutique corporate law firm in Sydney. Reyna also completed a rotation in Litigation and Dispute Resolution at top-tier Australian law firm, Allens. In addition to this she successfully completed internships at the Hague Conference Asia-Pacific Regional Office (HAPRO) in Hong Kong and at Linklaters in London.

Reyna Ge’s strong appreciation for international affairs and her experience working in Hong Kong, London and Australia equip her well to meet the challenges of working at The Hague Conference.

Reyna will be presented with her award by the Hon Michael Kirby AC CMG FAIIA on Monday 15 February 2016.

For those interested in applying for the 2017 Nygh Internship, applications close on 30th September 2016. Please visit the AIIA’s website at www.internationalaffairs.org.au/youth-community/nygh-internship/.

Dr Nygh’s family donated funds to establish the Peter Nygh Hague Conference Internship. An additional $50,000 was donated by the Commonwealth Attorney-General’s Department. Resolve Litigation Lawyers generously supports the administration of the award. Further donations are being sought to support this initiative. All donations are tax deductible.

The Australian Institute of International Affairs (www.internationalaffairs.org.au) was established in 1924 as an independent non-political body to promote an interest in, and understanding of, international affairs. The AIIA operates nationwide with 1,500 members across seven State and Territory branches. The AIIA provides a forum for discussion, and educates and disseminates ideas via its journal Australian Journal of International Affairs and book series including Australia in World Affairs. The Governor-General of Australia, His Excellency General the Honourable Sir Peter Cosgrove AK MC (Retd) is the AIIA’s Honorary Visitor and Patron.