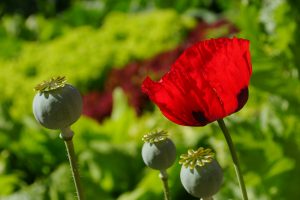 Interviews with Myanmar farmers indicate that farming poppies “may be as normal as breathing” for native peoples.[1] [2] Opium production has a long history in Myanmar, being handed down through generations within families, a tradition that has been in the region for hundreds of years.[3] The local reliance upon the plant was highlighted by a 2005 ban, in which 89.5% of villages in a Myanmar region suffered food shortages.[4] Clearly, opium production is an industry that is deeply rooted in Myanmar history, culture and politics.

Yet despite this importance, as highlighted by Oxfam International in the Position Paper on Gender Justice and the Extractive Industries, women working in Myanmar opium production are discriminated against at every stage, from farming to cultivation, to trafficking.[5] Although women often partake in all areas of opium production, they are mostly overlooked in the academic literature, as well as by development and aid agencies, like the United Nations Office on Drugs and Crime (UNODC). The question, then, is why?

This article posits that women are overlooked due to the global value chain of opium production, as the literature is shaped by wider transnational factors that minimise the experiences of Myanmar women, who are silenced by local systemic practices.

On June 26th, 2017, Myanmar[6] authorities publicly burnt $385 million of heroin, opium, cocaine, and methamphetamines, marking the International Day Against Drug Abuse.[7] The act symbolised the larger battle against drug abuse in Myanmar, which has subsequently struggled to overcome the flow on economic and social effects.

As a result, the issue of opium production in Myanmar has been studied by many academics through varied theoretical frameworks, including using historical or transnational security theories. These studies have produced a range of outcomes, including theories claiming the drug abuse issue stems from colonialism.[8] More recently, anthropological accounts of opium production have assessed the impact on local villages. However, absent from almost all academic literature on this topic is studies of women, and how they have been specifically impacted. Effectively, like other extractive industries, such as mining and palm oil,[9] women in opium production have been ignored by many key stakeholders.

A common theme in the study of extractive industries, the lack of literature on women in the opium industry is an example of what occurs when global processes contrast local dynamics.[10] Global consumption of cocaine, heroin and methamphetamine is growing dramatically – there are now an estimated 255 million drug users globally.[11] This has meant that much of the Myanmar opium finds its way to the global market as it is trafficked through the borders of Thailand and China.[12]

John F. McCarthy et. al. argue that the role of women is overlooked in this process as international actor frameworks fail to account for those local dynamics.[13] This means that as Myanmar opium is moved transnationally, the ability to focus on women in Myanmar is diminished.

This is reinforced by Ko-lin Chin, who highlights how wider regional activities have influenced the cultivation of opium, but omit the role of, or effects on, women.[14] Although women appear to be acknowledged as present in, and affected by the opium industry, their experiences are overshadowed by other factors that are embedded in the global value chain of opium production, such as the state and transnational actors.[15]

Equally important, women’s experiences are often lost as local authorities use opium production as a means of control and income. In other words, opium is used by local authorities to ensure a maintenance of power. In this system, the voices of women are even further marginalised. Without a hold on power at the local level in opium production, women remain hidden in broader structural analyses, evidenced by the literature.

Development agencies also fail to address and acknowledge the unique role of women in the Myanmar opium industry. This is due to difficulties associated with working in remote locations in Myanmar, compounded by the tense political situation, resulting in international aid agencies struggling to provide support to locals.[16] Although the UNODC conducts development projects, monitors opium cultivation, and educates citizens in Myanmar,[17] a 2003 UNODC report highlights that: “although [there is a] need for… a “gender-integrated” manner… to benefit women directly, this has not happened”.[18] A 2008 report conducted by UNODC does not mention women or gender at all.[19] There is no further evidence to indicate that the UNODC is attempting to address the unique needs of women, or that women in the Myanmar opium industry are being considered. This is further demonstrated in the most recent 2017 report by the UNODC that solely addresses the inequality between wages and does not consider the unique needs of women beyond wages.[20]

Looking into the role of women in the opium cultivation industry of Myanmar highlights how – like other extractive industries – women are often unnoticed by academic and development stakeholders. Although women are fully acknowledged as working in the industry, analysis of their role is inadequate. Women are not just involved in the cultivation of opium they are also involved in trading and trafficking. Despite this, their agency is diminished in the global value chain of opium production, as the literature is shaped by wider transnational factors. More needs to be done to study and understand the effects that opium industry has on Myanmar’s female population.

[6] Myanmar is also referred to as Burma, Myanmar will be used in this article for ease of reference.