Looking Into: Jihadists Under One Flag? 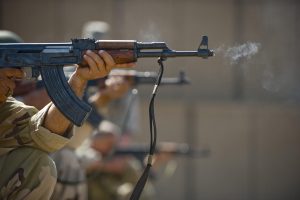 The Syrian civil war is raging on into its seventh bloody year, with thousands of civilians either killed or displaced as numerous internal groups grapple for power and control. The conflict has been further complicated and protracted by the actions of several external actors, including the US and Russia who many believe to be engaged in a proxy war against each other under the façade of ‘fighting terrorism’.[1]

Despite the convolution, and the countless actors involved, one thing is becoming clear – the power of jihadist groups in Syria is declining.[2] The two most powerful jihadist groups in the conflict, Islamic State (IS) and the constant allegiance and name-changing al-Qaeda in Syria (formerly also known as Jabhat al-Nusra, Al-Nusra Front, Jabhat Fateh al-Sham, Tahrir al-Sham) have lost much of the ground they had once gained in the Middle East.[3] IS has been decimated, being routed from all the major cities it once controlled in Iraq, with Iraqi Prime Minster Haider al-Abadi declaring victory over the group as the Iraqi military pursues the remnants of the group into the vast Syrian-Iraqi desert.[4] In Syria, al-Qaeda is fighting against a coalition of Syrian government forces and support groups that are using the current momentum to sweep through Syria and restore government influence and control.[5]

As each of these terrorist groups face existential irrelevancy, the possibility of their joining forces to make one last stand cannot, and should not, be ignored. There is the potential for a faltering jihadist insurgency to develop into a more irregular guerrilla warfare campaign, thereby undermining Syrian government authority and the security of the international community in the future.

IS and al-Qaeda have a strong history together, originating from the US-led invasion of Iraq in 2003, where al-Qaeda in Iraq fought an insurgency against the Iraqi government and the US-led occupation. In 2006, al-Qaeda in Iraq merged with five other militant groups and rebranded as the Islamic State in Iraq, later expanding operations into Syria in the wake of the Arab Spring uprising of 2010.9

This alliance has been largely built on strategy and convenience. Each group has many franchises or wilayats around the world, operating cooperatively and in opposition with each other as they compete for territory and resources. In the case of these two groups, cooperation is regionally based and a product of the condition on the ground, and thus often short-lived.[6] [7]

Despite having similarities in terms of ideology, their political goals are quite different, with al-Qaeda in Syria focusing on overthrowing the Assad regime and declaring their own version of an Islamic state governed by Sharia law. Meanwhile, IS follows a more apocalyptic version of Islam in which their leader, Abu Bakr al-Baghdadi, claims lineage from the prophet Mohammed and aims to create a self-sustaining and expanding fundamentalist Islamic state within Syria and Iraq.[8]

Initially, from 2011-2013, the two groups carved out large pieces of Iraq and Syria as a unified entity (the then named Jabhat al-Nusra focusing on Syria, and IS on Iraq), benefitting from combined resources and campaigns to carry out various operations to strengthen the wider jihadist community. This included the ‘Breaking the Walls’ campaign of 2013, which saw many jihadists broken out of jails across Syria and Iraq.[9]

However, although there have been various instances of unity, IS and al-Qaeda have hitherto remained two distinctly different jihadi groups. A major point of contention between the two has been the extreme acts of IS. Al-Qaeda does not condone IS’ attacks on other Muslims and has criticised IS’ refusal to accept reconciliation and arbitration with other jihadi groups.[10]

Tensions between the two intensified in 2013, when IS leader Bakr Abu al-Baghdadi tried to reign in an increasingly independent Jabhat al-Nusra, whose loyalties were to the higher al-Qaeda leadership, rather than al-Baghdadi himself.[11]

By 2014, the two groups had splintered off to pursue individual goals, after Bakr Abu al-Baghdadi refused to yield dominion to al-Qaeda leader Ayman al-Zawahiri.9

United They Will Fall?

Undoubtedly, a joint or cooperative jihadist force of al-Qaeda in Syria and IS could mean a doubling of forces and manpower for the combined group. Despite dwindling numbers in their ranks, each group at its strongest had an estimated 15,000–25,000 fighters, which could significantly bolster ranks for future offensives against mutual enemies.[12] The groups could also share heavy weaponry including tanks, armoured personnel carriers, anti-aircraft guns, as well as sharing precious intelligence and learning unconventional tactics. This includes IS’s successful weaponising of cheap and readily available domestic drones.[13]

Despite recent clashes between the two groups in the Syrian province of Hama, it is a distinct possibility that these groups will overlook their differences to ensure their survival. Indeed, Iraqi Vice President Ayad Allawi recently announced that he had received intelligence from Iraqi, and regional contacts knowledgeable about Iraq, that there are discussions between messengers of Abu Bakr al-Baghdadi and al-Qaeda leader Ayman al-Zawahiri, revealing that the two groups are in talks, perhaps to combine forces once more.[14]

The movement of militants and the flow of fighters under a unified banner would mean increased jihadists moving across Syria, and extra man-power and resources to bolster their multiples fronts and strongholds – as recently illustrated by the migration of a large group of Liwa al-Aqsa fighters who, after participating in rebel infighting, moved from the al-Qaeda dominated Idlib province to Raqqa to join with IS.[15]

For the US-led international coalition (in which Australia plays a prominent role, flying its own air sorties and combat missions), a jihadi coalition could seriously change the momentum of the current campaign to erode the groups’ capabilities. This could see a prolonging of Australia’s involvement in what is fast becoming a geo-political nightmare.[16]

For the US-led international coalition and Russia, stability in the region can only emerge after extremism is eradicated, which will also contribute to the wider security of the international community.[17]

As both jihadist groups face the prospect of being defeated in the strategic long-term, they will eventually have to decide whether their similarities are stronger than their differences.[18] In this case, Assad, the US coalition and Russia may have the opportunity to hit two birds with one stone and finally dismantle both groups.

A post-jihadist Syria, if such an entity is possible, will allow for the Assad regime to consolidate its battlefield victories into stabilisation projects.