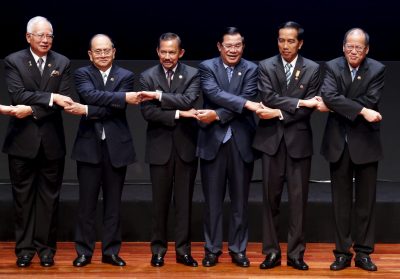 Major general-turned-president Suharto was not a strategic tactician, let alone a global visionary. Unlike former reality TV host turned President Donald Trump, the former sergeant in the Royal Netherland East Indies Army and Yoyakarta policeman knew what he did not know and cared that he did not know it. So he left the handling of foreign policy, like that of the economy, in the hands of professionals.

But in one crucial area — the creation of the Association of Southeast Asian Nations (ASEAN) and the imposition of its ostensible centrality in Indonesia’s foreign relations — Suharto’s legacy lingers.

As one of the five original signatories of the 1967 agreement that created ASEAN, Suharto had compelling reasons for the grouping to be successful. Stable external relations were a prerequisite for Suharto to concentrate on Indonesia’s internal development and the sidelining of his political opponents. And after Sukarno’s ill-fated konfrontasi with Malaysia, Suharto needed to embark on a major confidence-building exercise in order to create a peaceful regional environment.

The ASEAN of Suharto’s New Order period was also promoted as an appropriate instrument to deal with the ‘China threat’ of that time: Communist insurgencies, supported by China, were a shared domestic threat for ASEAN’s five founding members. A loose consortium of ferociously anti-Communist regimes was deemed the best response to this shared threat.

Housing the ASEAN Secretariat in Jakarta provided Suharto’s Indonesia with prestige and the opportunity to demonstrate its international importance at very little expense. Furthermore, ASEAN allowed Suharto, a somewhat uncharismatic leader who was uncomfortable on the international stage, to delegate the articulation of Asian values and a Southeast Asian vision to more flamboyant demagogues, such as Singapore’s Lee Kuan Yew and Malaysia’s Mohamad Mahathir.

Suharto understood that sitting in the ‘back seat’ rather than in the much-coveted ‘driver’s seat’ was not only the price to pay for good neighbourly relations but was also a more cost-efficient way of ensuring Indonesia’s security. Despite Suharto running a quasi-military regime, defence spending hovered at around 1.5 per cent of GDP during the New Order period.

ASEAN centrality lingers in Indonesia’s foreign relations today because of foreign policy inertia and because influential institutions within Indonesia would like it to remain so. The Indonesian Army is keen to maintain its disproportionate share of the small defence budget, while Indonesia’s Ministry of Foreign Affairs sees ASEAN membership as a way of defending its own bureaucratic turf and leveraging Indonesia’s diplomatic clout.

Yet the ASEAN of today is no longer the cosy gentleman’s club of autocrats that it was during most of the New Order period. Following the grouping’s enlargements in 1995–98, ASEAN is now a more disparate association comprised of countries with political regimes ranging from one-party states through to hybrid regimes and dysfunctional democracies. With the exception of Malaysia, Indonesia is now a political outsider in a club where autocrats continue to predominate.

Above all, the requirements of ASEAN membership have become more formalised and demanding with the ratification of the ASEAN Charter and the renewal of its three pillars: the ASEAN Political-Security Community (APSC), the ASEAN Economic Community (AEC) and the ASEAN Socio-Cultural Community.

The first two of these pillars are problematic for Indonesia. The ‘China threat’ today is of a different order than in the time of Suharto. Responding to it is no longer a question of domestic stability within the archipelago but of geopolitical instability that impacts on the archipelago itself. With China now able to line up a group of client regimes (Cambodia, Laos) and comprador states (Myanmar, Thailand) in continental Southeast Asia, the inability of the APSC to express a coherent position on Chinese assertiveness in the South China Sea has diminished ASEAN’s usefulness for Indonesia.

As for the AEC, it is seen more as an economic challenge rather than an opportunity at the regional level. Besides, as a founding member of the G20, Indonesia has a more significant international forum in which to defend its economic interests.

APEC membership, and the possible membership of a renewed Trans-Pacific Partnership or China-led Regional Comprehensive Economic Partnership, provides Indonesia with handy alternatives for economic engagement. Like the East Asia Summit, membership of these free trade agreements would provide a convenient fudge: paying token respect to ASEAN centrality while engaging with great and middle powers that are seen to be of more relevance for Indonesia’s future.

David Camroux is Honorary Senior Research Fellow at Sciences Po (CERI) in Paris and Visiting Professor at the Vietnam National University (USSH) in Hanoi. He is the Dissemination Coordinator for a major EU-funded project, Competing Regional Integrations in Southeast Asia (CRISEA).